St. Sophia Cathedral (Greek: Holy Wisdom) located in the Kremlin of the Russian city of Novgorod the Great (Russian: Вели́кий Но́вгород - Velikiy Novgorod) is the oldest Orthodox church building in Russia. The cathedral was constructed between 1045 and 1052. During the times of the Novgorod Republic the cathedral was the ceremonial and spiritual center of the republic. 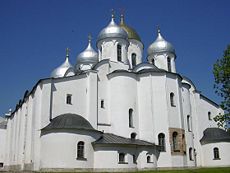 Cathedral of St. Sophia (the Holy Wisdom of God) in Novgorod.

St. Sophia Cathedral was built by Vladimir of Novgorod at the behest of his father, Yaroslav the Wise, as an expression of gratitude to the people of Novgorod for their support of Yaroslav in his struggle for Kiev. The five domed stone structure replaced a thirteen dome wooden church built in 989.

St. Sophia Cathedral was the first church in the Slavic lands that incorporated local features that diverged from the Byzantine style in the Eastern Church. The cathedral incorporated austere exterior walls with narrow windows reminiscent of Romanesque architecture of Western Europe. These features were used by architects of Novgorod in other major cathedrals during the following century, including those of the Yuriev and Antoniev Monasteries.

Through the years the cathedral was often damaged by fires. After a fire in the 1150s the helmet shaped cupolas are thought to have been added. Frescos in the interior were painted during the eleventh and twelfth centuries but now are barely visible due to damage from fires and painting of the interior in the nineteenth century.

A stone bell-tower for five bells was built during the fifteenth century. Its largest bell now stands on the ground near by after its “ears” were removed as “punishment” by Ivan III for warning the people of Novgorod of Ivan’s approach to the city during Ivan’s conquest of the independent Republic in 1570. The “ears” are the stubs at the top of a bell from which it is hung in a belfry, and without the “ears” the bell cannot be hung and rung. Ivan had silenced the bell.

During World War II, while the Novgorod Kremlin was seriously damaged during the Nazi occupation of the city, St Sophia Cathedral escaped serious damage. Spanish infantry, however, took the cross from the main dome of the building. After being displayed in the museum of the Military Engineering Academy in Madrid for over sixty years, the cross was returned to the Church of Russia on November 16, 2004.