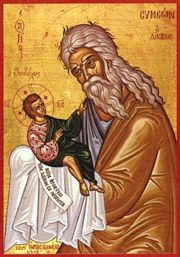 The glorious Prophet Simeon the God-receiver (also Symeon) was present when Jesus was brought into the temple as an infant (celebrated as the feast of the Presentation). His feast day is celebrated on February 3, with that of St. Anna the Prophetess.

St. Simeon is described in Scripture (Luke 2:25-32) as a righteous man who was waiting to behold the Christ before he died. Holding Him in his arms, he uttered the prayer of praise which is known as the Prayer of Saint Simeon or by the first two words in Latin, Nunc dimittis.

Lord, now let Your servant depart in peace,
according to Your word,
for my eyes have seen Your salvation,
a Light to lighten the Gentiles,
the Glory of Your people Israel.

This prayer is used in many liturgical services.

The Righteous Simeon was one of the seventy scholars who came to Alexandria to translate the Holy Scriptures into Greek. The completed work was called "The Septuagint," and is the version of the Old Testament used by the Orthodox Church.

St Simeon was translating a book of the Prophet Isaiah, and read the words: "Behold, a virgin shall conceive in the womb, and shall bring forth a Son" (Is 7:14). He thought that "virgin" was inaccurate, and he wanted to correct the text to read "woman." At that moment an angel appeared to him and held back his hand saying, "You shall see these words fulfilled. You shall not die until you behold Christ the Lord born of a pure and spotless Virgin." Tradition says he died at the great age of 360.

Simeon the Elder is filled with joy today,
receiving into his arms the Eternal God as an infant.
Begging to be released from the bonds of the flesh he cries:
"My eyes have seen the salvation,
which You have prepared for all the nations to see!"