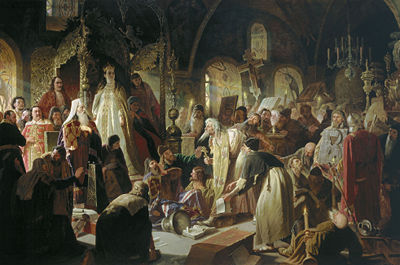 Nikita Pustosviat , real name Nikita Konstantinovich Dobrynin (Никита Константинович Добрынин)) (?—June 11, 1683) was one of the leaders of the Russian Old Believers during Raskol. He was dubbed Pustosvyat (rus. "swearing in vain") by adherents of Patriarch Nikon. Nikita was a priest in Suzdal and participated in editing of church books under Patriarch Joseph.

In 1659, Nikita arrived to Moscow and lodged a complaint about Stefan, Archbishop of Suzdal, accusing him of digression from Orthodoxy. When Stefan was acquitted, Nikita denounced him to Tsar Aleksei Mikhailovich. In 1682, the Old Believers gained support among the streltsy (praetorian guard) and Pustosviat achieved a July 5, 1682 church debate in the presence of the Tsar. The debate, however, ended in vain for him. The streltsy betrayed Nikita, who was subsequently executed.