The Law of God (Serafim Slobodskoy)

From OrthodoxWiki
(Redirected from Law of God Seraphim Slobosdkoy)
Jump to: navigation, search 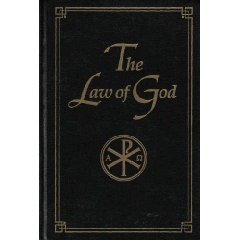 The Law of God by Fr. Seraphim Slobbodskoy is a book about the Orthodox Church.

A basic English language text suitable for teaching teenagers and adult catechumens, the original Russian edition (Zakon Bozhij/Закон Божий) was published for thirty-five years, drawing upon many sources in pre-Revolutionary Russia. Recognizing the need to confirm the believer's faith in a sea of heterodoxy, skepticism, rationalism, and ecumenism, it was written by Protopriest Serafim Alexivich Slobodskoy of the Russian Orthodox Church outside Russia as a catechetical manual for the parochial school he and his wife established at Holy Protection Orthodox Church in Nyack. Working late at night, he described the faith of the Orthodox Church with simple and profoundly lucid explanations. Published in 1966, this was, and remains, an influential catechetical text for Russians both abroad and in the Soviet Union where numerous copies were smuggled and copied by hand. Intended originally for youth and children, it became a respected work among adults as well, and was finally translated into English in 1992.

Representing traditional Orthodox Christianity, this edifying, richly illustrated book has been described as the single best simple overview of the Orthodox Faith with lucid and profoundly simple explanations of the Church’s Feasts and Fasts, and It’s Orthodox practice. Since its publication by Holy Trinity Orthodox Seminary (Jordanville, New York), in 1966, it has served as the chief catechetical text in most Russian Orthodox parishes, particularly among parishes affiliated with ROCOR. Originally published in Russian, it has subsequently been translated into English, German, and Ukrainian. The Russian version has been highly influential in Russia, and is a required text for those seeking a seminary education. According to Patriarch Alexi II of Moscow, in an interview "Religious literature published by the Russian Church Abroad made its way into Russia in limited quantities even during the period of the "iron curtain." This was very valuable assistance. Different times came, and the legacy created in the Diaspora was republished in Russia in enormous editions—Protopriest Seraphim Slobodskoy's Law of God alone, for instance, is used by hundreds of thousands, if not millions, of children in Sunday schools, while teenagers use this book to prepare for seminary."[1]

The book is organized into five parts: