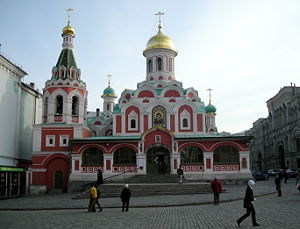 The Kazan Cathedral on the Red Square in Moscow, Russia.

The Kazan Cathedral of Moscow, located on Red Square, was originally built in 1636 in honor of the Icon of the Our Lady of Kazan (Russian: Казанская Богоматерь) and to commemorate Tsar Michael’s victory, in 1612, over the Poles at the end of the Time of Troubles. The current building is a reconstruction of the original cathedral that was destroyed in 1936 by the Bolshevik government.

The events that led to construction of the Kazan Cathedral took place in 1612 during the Time of Troubles, following the end of the Rurik dynasty. During this period Polish forces, in supporting claims to the Russian throne, had occupied Moscow. Russian liberation forces on the way to retake Moscow were led by Prince Dmitri Pozharsky and Kuzma Minin from Yaroslavl. They carried with them the Our Lady of Kazan Icon from Yaroslavl. The Russians laid siege to the Poles who occupied the Kremlin and the walled Kitai-gorod area next to the Kremlin. The Poles were soon defeated and retreated from Russia.

Following the expulsion of the Poles, Prince Dmitri credited their victory to the divine help of the Icon of the Theotokos of Kazan. In honor of the icon, and to commemorate the victory over the invaders, Dmitri financed the construction on Red Square of a small wooden church dedicated to the icon. The church was placed in the northeast corner of Red Square as one enters the square through the Resurrection Gate. The wooden church was destroyed by fire in 1632. Tsar Michael directed that the church be replaced. This time it was built of brick. The new church had a single dome and featured a number of tiers of Kokoshniki, a wide gallery, and a tent shaped belfry. Over the years many modifications were made to the church so that its original design was lost. While attempts, by Peter Baranovsky, were made between 1929 and 1932 to restore the exterior of the cathedral to its original appearance, the accuracy of the restorations were questioned.

In 1936, the year of the three hundredth anniversary of the cathedral, the Kazan Cathedral was destroyed as the Bolshevik dictator Joseph Stalin (nee Joseph Vissarionovich Djugashvili) ordered the Red Square cleared of churches so that it could be used for military parades. In addition to the cathedral, the Resurrection Gates. that stood at the entrance to the Red Square, were also demolished so as to not inhibit entry of parade vehicles and armed forces personnel onto the square.

Within the Perestroika initiatives of the late 1980s, a decision was made to re-build the Kazan Cathedral. The reconstruction was conducted under the direction of architect Oleg Zhurin, a pupil of Peter Baranovsky, using Baranovsky’s plans that he had prepared in the early 1930s. Construction began on November 4, 1990, the feast day of the icon, with the laying of the cornerstone by Patriarch Alexei II. Three years later, the restored cathedral was consecrated and reopened on November 4, 1993.