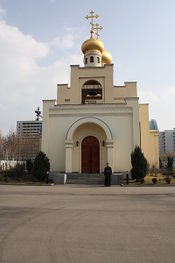 Holy Trinity Church in Pyongyang is an Orthodox church in North Korea. After a visit to the St Innocent of Irkutsk church in Khabarovsk in course of a trip to the Russian Far East in 2002, President of DPRK Kim Jong-Il personally gave permission for the construction of an Orthodox church in North Korea, and construction began in 2003. The foundation stone laying ceremony was held by Archbishop Clement of Kaluga, DECR Deputy Chairman, on June 24 2003. The church was consecrated in 2006 by Metr. Cyrill of Smolensk and Kaliningrad. During the consecration of the church, the first North Korean priest was ordained[1]

The church is served by two priests, Theodor Kim and John Ra, both citizens of North Korea[2] The church is located in the Chonbek district, tel./fax: (850) 238 14 650. Services are held every Saturday and Sunday.