From OrthodoxWiki
(Redirected from Helena)
Jump to: navigation, search 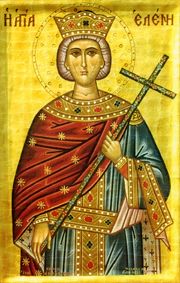 The holy and right-believing Empress Helen (also Helena and Elena), Equal to the Apostles (c. 248 – c. 329), was the mother of Emperor Saint Constantine the Great. Her feast day is on May 21, together with her son.

She was probably born in Drepanum (afterwards re-named Helenopolis) on the Gulf of Nicomedia and allegedly the daughter of an innkeeper. Later legend, mentioned by Geoffrey of Monmouth, claimed that she was a daughter of Briton King Coel, who married her off to Constantius Chlorus I to avoid more war between the Britons and Rome. Monmouth further states that she was brought up in the manner of a queen, as she had no brothers to inherit the throne of Britain.

Constantius Chlorus divorced her (circa 292) to marry the step-daughter of Maximian, Theodora. Helen's son Constantine later became emperor of the Roman Empire, and following his elevation she became a presence at the imperial court.

She is considered by the Church to be a saint, and is famed for her piety. Eusebius of Caesarea records the details of her pilgrimage to Palestine and other eastern provinces. She is traditionally credited with the finding of relics of the cross of Christ, and with finding the remains of the Three Wise Men, which currently reside in the Shrine of the Three Kings at Cologne Cathedral.