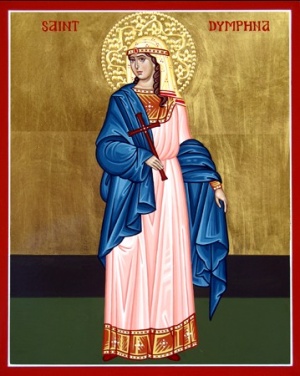 The holy and glorious Virgin-martyr Dymphna

The holy and glorious Virgin-martyr Dymphna (also known as Dimpna or Dympna and may be synonymous with the Irish Ss. Davets and Damhnait, Damhnade) was a 7th-century Celtic saint who died circa 650. The church commemorates her feast day May 15 and she is the patron saint of those who suffer from mental illnesses and nervous system disorders, epileptics, mental health professionals, incest victims, and runaways.

The story of St. Dymphna has been preserved in a thirteenth century life written by a canon of the Church of St. Aubert at Cambrai and commissioned by the Bishop of Cambrai, Guy I (1238-1247). The author expressly states that his work is based upon oral tradition and a persuasive history of inexplicable and miraculous healings.[1]

Born in Ireland, tradition holds that she was the daughter of a pagan Irish King and his Christian wife. When she was only fourteen, her mother passed away. Her father driven mad by grief and mental illness started to make awkward sexual advances towards her. She was forced to flee to Belgium accompanied by her confessor father, St. Gerebernus. Her father, Damon, sent soldiers and eventually found them. Confronting them at Gheel, he ordered his soldiers to slay Gerebernus and begged Dymphna to return with him to Ireland. When she refused, he decapitated her in a rage. Locals later buried the two bodies. A few years later, they decided to make a better burial site and found two tombs where they had buried them.

Their relics were discovered at Gheel near Antwerp in the thirteenth century. The burial place of Dymphna has long been associated with accounts of miraculous cures of mental illness. An infirmary was built there in the 13th-century and to this day Gheel hosts a world-class sanatorium.