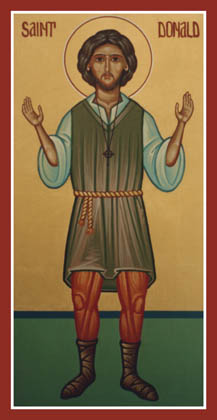 Our venerable and God-bearing Father Donald of Ogilvy, Confessor of Scotland (d. circa 716) (also Donivald, Donevald, Domhnall, Donwald) was a widower who lived a monastic life with his nine daughters. His feast day is July 15.

St. Donald lived in in Olgivy, in Forfarshire, Scotland, in the early part of the 8th century. Upon the death of his wife, he and his nine daughters began to live a monastic lifestyle at home under his direction, cultivating the land by hand, and eating barely bread and water once a day. After St. Donald's repose, his daughters all entered a monastery in Abernethy, founded by Ss. Darlugdach and Brigid, where they became known as the Nine Maidens, or the Nine Holy Virgins.