Chancery office of the Orthodox Church in America The property was acquired on December 31, 1957. It purchased part of the former Griswold estate for the nominal amount of one dollar. Mrs Ruth Griswold, a widow who could no longer maintain her large home and property, wanted to consign the estate to a charitable organization which would put it to good use. The OCA was able to acquire the mansion and the surrounding 15 landscaped acres of the much larger property. A condition of the purchase was that the OCA would liquidate some $12,000 in delinquent taxes and legal fees for Mrs Griswold. At the time of the purchase, the structures and land acquired by the Church were appraised at $122,000.

At this time , the Church was known as the Russian Orthodox Greek Catholic Church in America (or the Metropolia) had its administrative offices and the residence of its primate, Metropolitan Leonty, at Holy Virgin Protection Cathedral on 2nd St in Manhattan, New York. In procuring the this estate, the Church found a retreat for the Metropolitan, away from the noise and hectic pace of New York City. This also was a place where church records could be archived, organized, and stored. A library was created, and a chapel established.

A former library room, on the ground floor, became the location of St Sergius of Radonezh Chapel . The consecration was presided by Metropolitan Leonty on October 11, 1958. The service was attended by several bishops as well as many clergy and faithful from the metropolitan New York area.

The chapel saw the establishment of a regular cycle of liturgical services for a growing community of faithful with a resident priest assigned by the Metropolitan. It functioned as a subsidiary community of the cathedral. And in those early years, a pilgrimage was annually attended by numerous clergy and faithful from parishes in the New York metropolitan area, with a Hierarchical Divine Liturgy served in a walled garden on the property.

In the 1960s, Metropolitan Leonty began to travel less and to spend more time at the Oyster Bay Cove residence. In order to include the Metropolitan, various ecclesiastical administrative bodies began to hold their meetings at his residence rather than at the Cathedral in New York City.

In 1963 that Metropolitan Leonty received a church delegation from Russia. This visit was the initial contact with the Russian Church, following decades of estrangement, that sparked the negotiations which culminated in the granting of autocephaly.

In 1970’s, the aging structure of Holy Virgin Protection Cathedral on Manhattan's lower East Side, and the deteriorating neighborhood surrounding it, was not the ideal location for its central offices in it new status as an autocephalous church. The Oyster Bay Cove residence was also better suited to receiving foreign church dignitaries, which the OCA would now. It was decided in 1974 to permanently transfer the Metropolitan's primary residence and the chancery office to the Oyster Bay Cove (also called Syosset) location.

The chapel community, which had in effect functioned as a parish, was gradually dissolved, and became the Chapel of the Metropolitan's Residence. Today, the chapel maintains a regular cycle of services, celebrated by the clergy assigned to the OCA Chancery. The congregation consists primarily of the chancery staff and their families and several families who live in the immediate vicinity of the Chancery.

The consecration of Holy Chrism has been celebrated several times in the chapel, during the 1970s and 1980s. 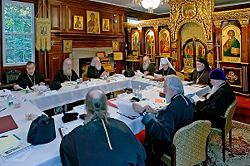 Since the 1970’s, the chapel has also been the site of the regular semiannual meetings of the Holy Synod of Bishops of the Orthodox Church in America. Twice a year, all the diocesan bishops of the OCA gather in a liturgical celebration of the Eucharist and, within the prayerful atmosphere of the chapel, discuss and deliberate matters concerning the life of the Church.

Various other meetings are held in the chancery building throughout the year. All are preceded by corporate prayer in the chapel, home to relics of the North American Saints Herman, Innocent, Tikhon, Alexis as well as several other saints, most notably St Sergius of Radonezh, the chapel's heavenly patron.