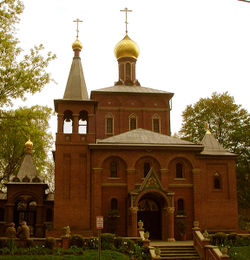 The Cathedral Church of St. John the Baptist is a cathedral of the Russian Orthodox Church Outside of Russia located in Washington, D.C. The cathedral was originally founded as a parish church by St. John of Shanghai and San Francisco.

During the late 1940s Archbishop John (Maximovitch) visited Washington, D.C. in the United States of America to assure arrangements were completed for refugees displaced in the chaos after World War II. While in the city in September 1949, he participated in the founding of a parish among the Russian Orthodox refugees in the city. The parish was dedicated to St. John the Forerunner. This congregation then met each Sunday for nine years in the Resurrection Chapel of the National Cathedral of the Episcopal Church in Washington. In 1956, the congregation acquired land for the present Cathedral off Sixteenth Street near Meridian Hill. By 1958, they were finally able to worship in the first stage of their own church building. 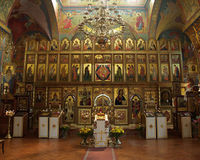 Through the following decades the church structure was expanded and improved. Today, the building has been executed in the seventeenth century Muscovite-Yaroslav-style. The cathedral is surmounted by gilded onion domes, each crowned with a traditional Russian three-barred cross, and a separate belfry. Icons of scenes from the life of St. John the Baptist are positioned over the three doors that adorn the exterior. The interior of the church is covered with murals of many saints as well as numerous centuries old icons and an imposing iconostasis with four-tiers of icons.

Since its establishment the following priests have served the parish of the St. John the Forerunner: