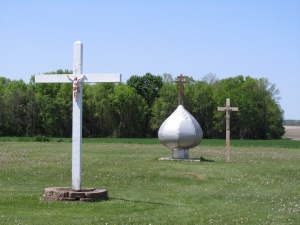 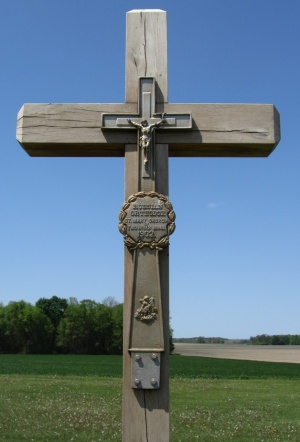 St. Mary Church was one of the earliest Orthodox Churches to be established in the U.S. state of Minnesota. The church was located in Two River Township, near Holdingford, Bowlus, and South Elmdale in rural Morrison county, and was founded in 1895.

The building itself was a traditional American neo-Gothic, white clapboard church, with the exception that topping the tower, instead of a steeple, there was a silver onion dome with a Russian three-bar cross. Tsar Nicholas II of Russia gave the parish a crystal chandelier as a gift; this chandelier, though non-electric, reportedly hung in the church even after the congregation disbanded.

The priest in 1952 was Rev. M. Chervinsky. An earlier priest of this church was the V. Rev. John Handziuk, who, according to the Brainerd Dispatch of September 6, 1947, had recently died in Baltimore.[1]

By the 1980s, services were only held occasionally, and the church formally disbanded sometime in the 1990s. The church building was razed in the early 2000s, though the onion dome and two crosses remain in the church's cemetery. Before the building was demolished, some church items which could be salvaged were transferred to Holy Myrrh-bearers Church in St. Cloud, Minnesota, which had been established as an Orthodox mission in 2000.

The picture on the cover of the book America's Religious Architecture: Sacred Places for Every Community by Marilyn Joyce Segal Chiat is a photo of St. Mary some time after the congregation disbanded but before it was torn down.