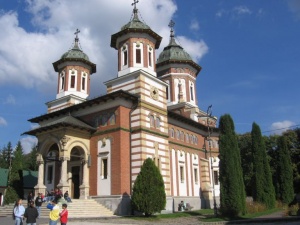 The Great Church of the Sinaia Monastery

The Sinaia Monastery, founded by Prince Mihai Cantacuzino in 1695 and named after the great Sinai Monastery at the base of Mount Sinai, is located in Romania. It is now inhabited by 20 Orthodox Christian monks.

The monastery consists of two courtyards surrounded by low buildings. In the center of each courtyard there is a small church built in the Byzantine style. One of them - "Biserica Veche" (The Old Church) - dates from 1695, while the more recent "Biserica Mare" (The Great Church) was built in 1846.

The monks possess a library that constitutes a repository for valuable jewels belonging to the Cantacuzino family, as well as the earliest Romanian translation of the Bible, dated 1668.

Until 1850, Sinaia consisted of little more than the monastery and a group of huts. In 1864, however, the monastic estate was assigned to the Board of Civil Hospitals (Eforia Spitalelor Civile), which opened a hospital and several baths and helped develop mineral springs in Sinaia. 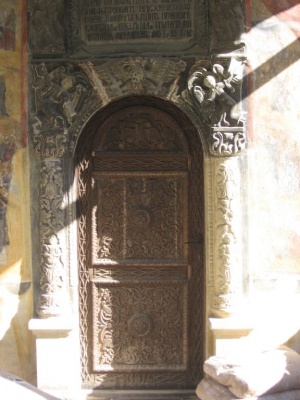 The Entrance door of the Old Church of the Sinaia Monastery

The Old Church was built in 1695. As of 2006 it is currently closed for renovations until it is restored to its former beauty.

The Great Church was first built during 1842-1846 as a smaller building. The construction occurred under the leadership of the fathers superior (Egumeni) Ioasaf and Paisie, financed by money from the monastery.

The Board of Civil Hospitals rebuilt parts of the church from 1897 to 1903. This change gave the Great Church the appearance it has today.

The monastery's current appearance was created by George Mandrea, an architect who combined the Moldavian style's thick walls with the Brâncovenesc style from Valachia. A green enamel belt encircles the building in three uninterrupted lines. It is said this is the symbol of the unity of Holy Trinity in one God and the unity of the three Romanian Kingdoms in one country.

The paintings are painted on gold mosaic - typical for the neo-Byzantine style. These paintings were done by the Danish artist Aage Exner. The main pictures shows five people:

The furniture is made from wood (paltin and oak) by Constantin Babic and his students at the Ṣcoala de Arte si Meserii in Bucharest. The thrones are gold-plated. The king's throne has the royal emblem and the writing Nihil sine Deo (Nothing without God). The queen's throne has the letters E.D. embossed.

The two Russian icons of Saint Serghei and Saint Nicholas were a gift from Tsar Nicholas II of Russia and were given in 1903 to the Igumen Nifon Arhimandritul for the baptism of Prince Nicholas (Nicolae), son of King Ferdinand (1914-1927).

Thanks to Carol I, the Great Church of the monastery became the first church to use the electric lights in Romania. 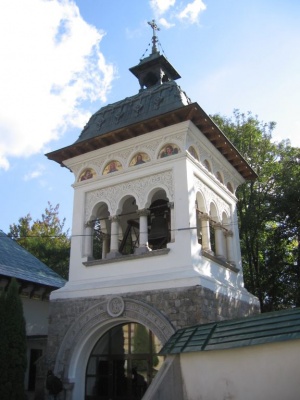 Under the leadership of Igumen Nifon Popescu (1888-1909) the Bell Tower was added. It was finished in 1892. The bell weights 1700 kg and was brought from the Colţea Tower in Bucharest.

To celebrate the 200th anniversary of the Old Church in 1895, the monastery opened a museum. This was the first exhibition of church objects in Romania.

Prince Mihai Cantacuzino founded the monastery in thanksgiving for having escaped Ottoman brigands upon his return from a pilgrimage to St. Catherine's. It was named Sinaia in recognition of St. Catherine's.