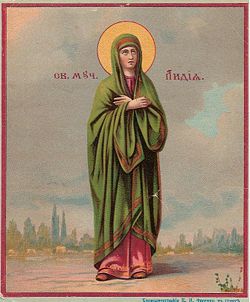 The holy and glorious Martyr Lydia the Martyr was the wife of Philetus, a Roman official at the court of Emperor Hadrian. Early in the second century, she accepted martyrdom with her family during the persecution under Hadrian after having openly confessed their faith in Christ the savior. She is commemorated on March 23.

Lydia and her husband Philetus were Christians who lived according to Christ's teachings and were especially diligent in the education of their sons Macedonius and Theoprepius. Lydia was a kind and loving mother and the principal educator of her sons. She tried to ensure her sons were educated in the spirit of Christianity by personal and living examples in accordance with Jesus' teachings.

Lydia, with her husband Philetus and their sons Macedonius and Theoprepius, lived in the city of Rome during the reign of Emperor Hadrian (117 to 138). Having openly confessed their faith in Jesus Christ, Lydia and her family were seized and subjected to interrogation during a period of persecution about the year 121. Having not satisfied the interrogators, Hadrian sent the family was sent to Illyria to be tortured under the governor, Amphilochius.

Upon their arrival in Illyria, Amphilochius had them submit to torture by suspending them from trees and having their bodies scraped and cut by knives, after which they were thrown into prison. There they were joined by the jailer Cronides, who also had made known that he was a believer in Christ. During the night, an angel appeared to them while they were praying and singing praises to God. The appearance of the angel strengthened them for their coming martyrdom. The next day, still being resolute in their faith in Jesus Christ, the persecutor ordered further tortures for Lydia, her family, and friend, Cronides. They were thrown into a cauldron of boiling oil. But, when they were thrown into the oil, it cooled, leaving them unharmed.

Amphilochius was astonished by this event, and he himself came to believe immediately in Christ and entered the boiling oil, crying, "Lord, Jesus Christ, help me." He remained unharmed. Learning of these miracles, Hadrian came to Illyria to take control of the persecutions. The interrogations and tortures were again repeated. Again and again the holy martyrs were thrown into the hot oil, but Lydia, her family, and Amphilochius and Cronides remained unharmed. Humiliated, Hadrian returned to Rome. It was after Hadrian returned to Rome that Lydia and the other martyrs gave up their souls to the Lord while praying their thanks to God.