St. Lalibela of Ethiopia was a late 12th and early 13th century emperor of Ethiopia credited with the building of the rock-hewn churches of Roha, which was later renamed after the Saint. St. Lalibela is commemorated by the Ethiopian Orthodox Church on 12 Sene (June 19).

St. Lalibela was a member of Ethiopia's Zagwe dynasty born in the 1150s to Zan Siyum, a brother of Emperor Yimrihanne Kristos. At the time of his birth Harbay, his half-brother, was emperor, but the Saint's mother named him Lalibela ('the bees acknowledge his supremacy' in Agew) because after his birth a swarm of bees surrounded him, signifying in that time that he would become a ruler. In part because of this prophecy, which made his brother Harbay jealous of him, when St. Lalibela matured he left the world to become a hermit in the mountainous northern region of Tigre. 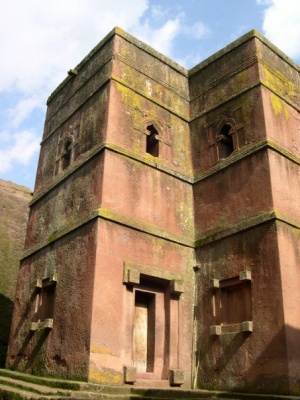 Bete Giyorgis, the grandest of the churches in Roha.

While in Tigre St. Lalibela met his future wife, Mesqel Kibra ('glory of the Cross'), after which he undertook a difficult pilgrimage to the Holy Land, which were then occupied by the Roman Catholic Crusaders. While St. Lalibela was traveling to and in the Holy Land his brother sent emissaries to Rome, possibly in response to an offer by Pope Alexander III of an alliance between the West and the isolated Ethiopian Empire. When Lalibela returned to Ethiopia he marched with his supporters on Roha, where Harbay abdicated and recognized his brother as emperor. It is possible that the ease of the Saint's rise to power was caused by the opposition of the Ethiopian Orthodox Church to Harbay's favorable response to Rome's overtures.

At his enthronement St. Lalibela took the name Gebre Mesqel ('servant of the Cross'). He became known throughout the empire for his generosity to all who approached him and his voluntary embrace of poverty in his own personal life. Despite the internal opposition within the empire to the Zagwe from members of the old imperial family in Tigre and Shewa and pressures from the empire's Muslim enemies to the east and pagan enemies to the northwest St. Lalibela became known as the greatest emperor of the Zagwe.

In his relations with Egypt St. Lalibela sought to maintain peace between the two countries, a policy which paid off after Saladdin's reconquest of Jerusalem when the sultan intervened in a dispute in favor of the Ethiopian monks in the city. The positive relations established between Ethiopia and Egypt enabled the Coptic and Ethiopian Orthodox Churches to maintain closer communication and also allowed the new metropolitan appointed during St. Lalibela's reign to leave for Ethiopia without any interference from the Egyptian government. 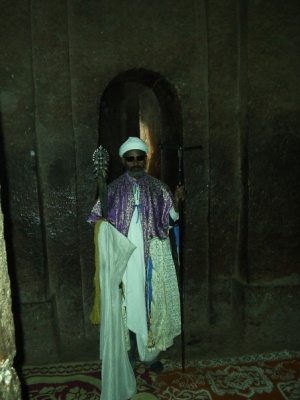 The most enduring monument to St. Lalibela's greatness are the churches he had built in his capital, Roha. The emperor is said to have had a vision in which he was commanded to build a new Jerusalem in Ethiopia and was given the design of the rock-hewn churches. The churches represent the height of Ethiopian Orthodox ecclesiastical architecture and are in the tradition of numerous other rock-hewn and cave churches in northern and central Ethiopia. Since St. Lalibela's death his former capital has become a major pilgrimage center of the Ethiopian Orthodox Church, many of whose members are so awed by the churches that they believe they were carved out of the earth by the angels.

After the emperor's repose he was buried in one of his churches in Roha, where he remains to this day. His hand cross is also preserved in the holy city to the present day.