From OrthodoxWiki
(Redirected from Joshua)
Jump to: navigation, search 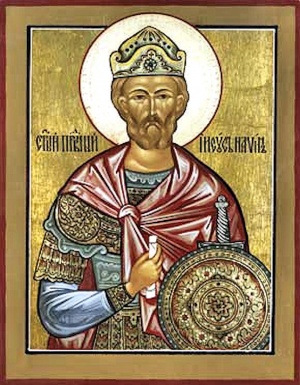 Icon of Jesus of Navi (Joshua).

Joshua of Navi, was born Hoshea the son of Nun, of the tribe of Ephraim in Egypt prior to the Exodus, but Moses called him Joshua, (Numbers 13:16) the name by which he is commonly known.

He was one of the twelve men sent by Moses to survey the promised land, and together with Caleb, the only one to provide a favorable report to the people, calling them to trust in God's providence (Numbers 14:3). Joshua and Caleb were the only adults who left Egypt to enter the Promised Land as a result of their murmuring against God (Numbers 14:27-34).

When he was eighty-five years of age, he became the successor of Moses. [1] He restrained the flow of the River Jordan and allowed the Israelites to cross on foot. By his prayers he caused the sun to stop in its course when he was waging war against the Amorites. He divided the Promised Land among the Twelve Tribes of Israel and governed them for twenty-five years. He also wrote the Old Testament book, Book of Joshua, that bears his name, and having lived 110 years in all, he reposed in the sixteenth century before Christ. His name means "God saves."

He is commemorated by the church September 1.

As we celebrate the memory of Thy Prophet Joshua, O Lord, through him we beseech Thee to save our souls.

At thy prayer, the sun stood still, O righteous Jesus; for thou rightly wast adorned both with the likeness and the name of Him at Whose death the sun grew dark. Ever entreat Him to save us who honour thee.