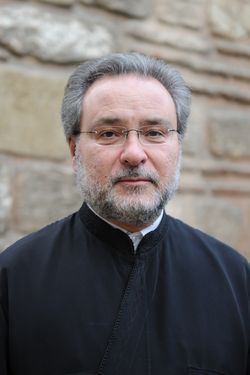 Rev. John Chryssavgis was born in Australia on April 1, 1958. He matriculated from the Scots College in Sydney, New South Wales in 1975 and received his degree in Theology from the University of Athens in 1980. He received a diploma in Byzantine Music from the Greek Conservatory of Music in 1979 and was awarded a research scholarship to St. Vladimir's Theological Seminary in 1982. He completed his doctoral studies in Patristics at the University of Oxford in 1983. Chryssavgis read patristic theology at Oxford. His work and writing have focused on medieval theology, as well as on the history of the Eastern Church. He holds degrees in theology and sacred music. His teaching has covered wide-ranging topics, such as theological, political, and social developments, themes and personalities of the Middle Ages, including cultural and religious relations and tensions between East and West. His interests have embraced the areas of spirituality, ecology, and liturgy. His research has specialized in the ascetic thought and practice of the early Church, especially from the desert tradition of Egypt (fourth century) through the regions of Palestine (fifth-sixth centuries) and Sinai (seventh century). After several months in silent retreat on Mt Athos, he worked with the Greek Orthodox Primate in Australia (1984-94) and was co-founder of St Andrew's Theological College in Sydney, where he was Sub-Dean and taught Patristics and Church History (1986-95). He was also Lecturer in the Divinity School (1986-90) and the School of Studies in Religion (1990-95) at the University of Sydney.[1]

In 1995, he moved to Boston, where he was appointed Professor of Theology at Holy Cross School of Theology and directed the Religious Studies Program at Hellenic College until 2002. He established the Environment Office at the same School in 2001. He has also taught as professor of Patristics at Balamand University in Lebanon.

In recent years, he has published several books and countless articles in international journals and encyclopedias in the area of religion and ecology, social justice and peace, with forthcoming books including John Climacus: from the Egyptian Desert to the Sinaite Mountain (Ashgate, UK, Winter 2004); and Light Through Darkness: Insights into Orthodox Spirituality (Orbis Books, Summer 2004)

He currently serves as theological advisor to the Ecumenical Patriarch on environmental issues.

He lives in Maine.