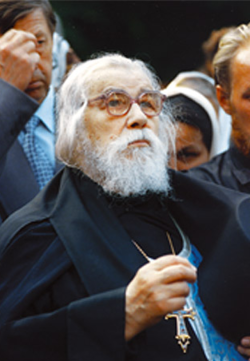 He was born in 1910 in the town of Oryol as an eighth child in the family of Mikhail and Elizaveta Krestiankin. The name Ioann was given to the boy in honour of Saint Ioann of Desert. His letters and theological works are well known and widely published in Russia and some other countries. Many cases of Fr. John's clairvoyance and wonderworking were recorded.

In 1950 John was arrested by Soviet authorities for his pastoral service and sentenced for seven years of labour camps. He was freed in 1955.

Father John Krestiankin was a spiritual father and confessor for many Orthodox parishioners, providing religious instructions and guidances on various aspects of faith and Christian life within Orthodox Church.

Among his most famous books are "The Experience of Preparing a Confession", "Sermons, Thoughts and Congratulations", "Reference Book for Monastics and Laymen", the compilation "Letters of Archimandrite Ioann (Krestiankin)".