From OrthodoxWiki
(Redirected from Filaret (Vakhromeev) of Minsk and Slutsk)
Jump to: navigation, search 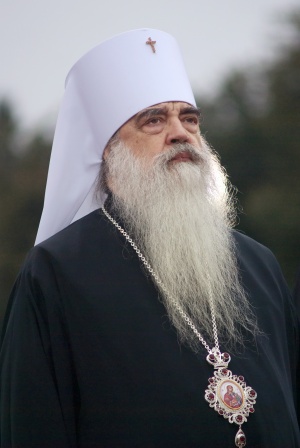 Filaret, Metropolitan of Minsk and Slutsk.

During the course of his studies, he chose the name Filaret (in honour of the Righteous Philaret the Merciful), when he received the monastic tonsure on April 3, 1959. Two years later in 1961, he graduated from the Academy with a doctorate in theology.

From September 1963 he served as the Head of the Graduate School of the Moscow Theological Academy, and on October 8, 1963 he became an Archimandrite. On October 24, 1965 he was consecrated bishop at the Holy Trinity Cathedral of the Alexander Nevsky Lavra.

After serving in Tikhvin, Kaliningrad and Moscow, Filaret was appointed Metropolitan of Minsk and the entire Belarusian SSR in 1978.

In 1989, as the collapse of the Soviet Union was imminent, Filaret was appointed to become the Patriarchal Exarch of the new country of Belarus. He also served a short term in the Supreme Council of Belarusian SSR as a people's deputy.

In 2006, he was awarded the title "Hero of Belarus" by President Alexander Lukashenko for his work to restore spirituality among the Belarusian people.[1][2]