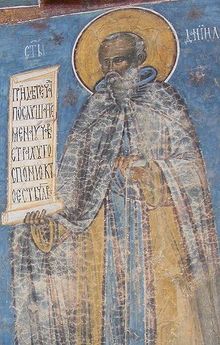 Daniel the Hermit, fresco from the Voronet monastery

Our venerable and God-bearing Father Daniel the Hermit of Voroneț, Sf. Daniil Sihastru de la Voroneţ in Romanian, was a 15th century monk and the spiritual father of Stephen the Great, the Voievod of Moldova. Under his guidance, Stephen the Great defended Moldova from Ottoman invasion and dedicated himself and his rule to God.

Daniel lived alone for 14 years in a cell carved from a boulder in a forested valley close to Putna Monastery, which is now used as a chapel according to the rules of Mount Athos. His relics are housed at Voroneț Monastery, and he was officially glorified by the Synod of the Church of Romania in 1992. He fell asleep in 1496, and his feast day is December 18.

Daniel was born into a poor family in a village close to Rădăuţi in the early years of 15th century. He was baptised with the name Dumitru but took the name David when he entered the cathedral monastery at Rădăuți. Here he learnt to follow the monastic life, but eventually, wishing to lead a truly holy life away from the temptations of the world, he retired to the St. Laurence Skete in the community of Vicovul de Sus. Here he entered the Great Schema with the name Daniel (Daniil).

Later he went to live alone in a small cell carved from a rock in the Putna valley. Eventually, he became the spiritual father of Prince Stephen the Great of Moldova whom he advised for many years and who built, at Daniel's urging, Putna Monastery close to the site of his cell. After the death of Metropolitan Teoctist of Moldova in 1478, he left Putna and made himself a new cell, carving it from a cliff close to the river Voroneț. He lived here in great poverty and unceasing prayer, earning wide reknown as a monk of great spiritual wisdom, and continued to encourage the Prince in his defense of Moldova against Turkish aggression. In 1488 Stephen the Great had another monastery, Voroneț, built close to Daniel's new cell. On his death, Daniel was buried in this monastery.