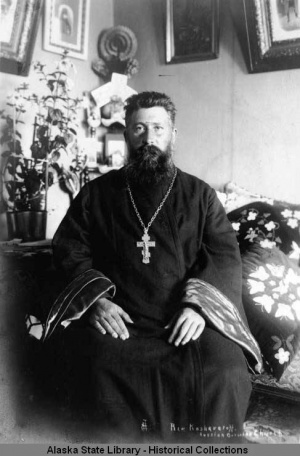 Archpriest Andrew Petrovich Kashevaroff (b. Sep. 19, 1863, Kodiak, Alaska - d. Apr. 3, 1940, Juneau, Alaska) was an Alaskan-born priest of the Russian Orthodox Church. He was of Russian and Native Alaskan heritage, and both his father and grandfather had served as missionary priests. He served the Church - as teacher, choir director, inspector, deacon, and priest - for over 60 years in many locales throughout Alaska . He was also the first librarian and curator of the Alaska Historical Museum and Library when it relocated to Juneau in 1919. During his tenure there, he collected thousands of items for the museum, providing an insight into Alaskan history of incalculable significance. In 2015, the state of Alaska honored Fr. Andrew Kashevaroff by naming its new State Libraries, Archives and Museum Building after him. This building was officially opened on June 6, 2016.

Rev. Andrew Kashevaroff was born on September 19, 1863 in Kodiak, Alaska to a priestly family. The Kashevaroffs had first come to Alaska around 1820, with Fr. Andrew's great-uncle. At this point, Alaska was still a Russian territory, and both his father and grandfather had served as missionary priests. Starting in about 1874, Fr. Kashevaroff received education in San Francisco, and, as a result, not only spoke Aleut and Russian, but also English. (He would also learn at least some Tlingit.) He was also a very gifted musician both in choral singing and on the violin, organ, and piano. After studying in San Francisco, he returned to Alaska in 1880 and worked as a psalmreader and teacher for the Church in Sitka. He was fired from this position in 1886, for supposedly philandering with women, but was eventually rehired in 1889.

In 1892, he met Bishop Nikolai, who was thoroughly unimpressed with him, considering Kashevaroff to be too thoroughly Americanized, too secular, and too mindful of earthly things. Against the wishes of his priest, he married Martha Bolshanin (b. Jan. 19, 1874 - Apr. 13, 1931), a Kiks.adí Tlingit of Sitka in 1893. Because the priest had not blessed this union, the young Kashevaroff and his bride were married in a civil ceremony at the local courthouse. As a result, Kashevaroff was transferred from Sitka to Nuchek (or possibly Nutchek).

After the move to Nuchek, Fr. Kashevaroff was transferred to Kodiak, and did not return to serve in the church in Sitka until 1900. In Sitka, he was the director of the Innokenti School and serve as choir director. He and his wife move made their final move to Juneau in 1912, where both spent the rest of their earthly days.

Over the course of his 60 years in service to the Church, Fr. Kashevaroff served in a number of places in Alaska, including Sitka , Nutchek, Kodiak, Killisnoo, Unalaska, and Juneau, first as a psalmreader, teacher, and choir director, then, after his ordination to the priesthood in 1904, as a priest. He briefly served outside of Alaska, in Jackson, California, from 1910 until 1912, then for a few months at St. Spiridon Cathedral in Seattle in 1912.

Although in his early years he may not have led a life that was entirely pleasing to the Church (or Church Hierarchy), he was a well-loved and able teacher and minister. In the early years, as a teacher, he taught the children English - an important skill as the Alaska territory had switched from Russian to American hands. This also helped ward off charges from other Christian denominations that Orthodoxy was merely a religion of a foreign agent. Singing was of particular importance to the Tlingit people, and Fr. Andrew directed and taught so that the Tlingit could sing the Liturgy in their own tongues, even establishing a special children's choir in 1889.

By the 1910s, Fr. Andrew seemed to be more sober in his ways and, besides receiving several awards from the Church, he was named the dean of the Sitka district and inspector of the Innokentii School. From 1912 on, he served as priest in Juneau.

Fr. Kashevaroff was assigned as the priest of St. Nicholas Cathedral in Juneau, Alaska in 1913. In 1917, as a result of the Bolshevik Revolution in Russia, his salary (which came from the Tsarist government) was permanently suspended. However, Fr. Kashevaroff remained serving at the cathedral, and took on such employment as music teacher, clerk of the weather bureau, and customs officer in order to support himself.

In 1918, Thomas Riggs, Jr. became the governor of Alaska. During his tenure, the state's archives and museum were moved from Sitka to Juneau and were opened to the public for the first time. Understanding that Alaska's heritage was something truly unique, he set out to build a collection that would tell the story of Alaska and her peoples before its treasures would be no more than a memory. Even in this early stage, there was fear that much of Alaska had been plundered of its truly valuable heritage pieces. Fr. Kashevaroff became involved with the Library and Museum from the very beginning in Juneau, as a founder, as a person who went out with "a missionary's zeal" to garner monetary support and items for it, and, for many years, its only employee. His knowledge and understanding of Alaska were unparalled; because of his background, he understood the Russian and Native Alaskan aspects to the culture, but was also comfortable as an American in this milieu. Fr. Kashevaroff would work as museum curator from 1919 until his death in 1940. It is also surmised that he turned down the opportunity to become Bishop of Alaska in part because it would make it impossible to continue with this work.

In 2002, state officials came to the conclusion that the State Office Building, which housed the Alaska State Museum, and their library, and historical collections were all running out of space and that a new building should be built. At the same time, the building housing the state archives was starting to suffer from severe structural damage. It was decided that a new building should be built which would house all four of these, and as the project progressed, it became known, at least colloquially, as SLAM (State Library, Archives, & Museum). In 2015, the Alaska State Legislature passed a bill naming the new library the "Father Andrew P. Kashevaroff Library, Archives and Museums". Alaska Governor Bill Walker signed the bill on May 5, 2015. The official opening of the building took place on June 6, 2016.