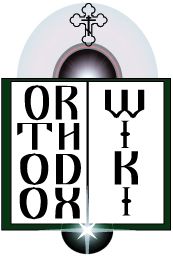 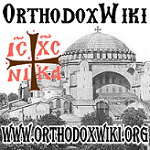 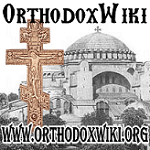 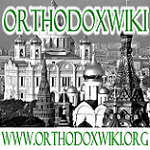 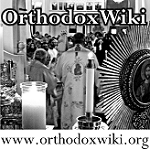 Submissions from a friend of Magda

I asked a friend of mine to try his hand at a logo for Orthodoxwiki, and here is his work:

Here's an idea I've had. The scroll is for "knowledge", and the current OrthodoxWiki symbol signifies Orthodoxy.
There is a larger version available. I realise there's a problem with the top left edge of the scroll, but this is more of a draft, really. 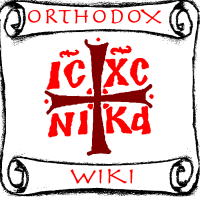 Hey. I think I'm still going to submit one today. I thought submissions were due today. I guess this will probably affect any votes I would receive because I know some have already voted. Can I still submit? Joe ( talk » inspect » chat ) 14:40, November 15, 2005 (CST)

Father, this was earlier in the day. My submissions can be seen on the logos page. Joe.

Please voice your opinions or cast your votes about the logos!

Which one is your favorite and why?

Do you have ideas for logos you don't have the technical know-how to create?
etc.

At some point, could there be a no-more-submissions-please-vote kinda thing? Perhaps people aren't voting because they may think something better will come along soon... -- oea 19:46, 23 Oct 2005 (EDT)

Hi oea, I think that's a good idea. Already, I've put up a note that submissions will stay open through Nov. 13th. I don't think we'll go much beyond that. The deadline will prob. be soon after that. I'll prominently announce it once it gets closer to the date, then we'll have some time to decide together. Fr. John

Personally, I think the best submission is HappyGrevling's SealLogo1.jpg (round with world behind the cross). I think it looks very nice and encompasses the world Orthodox feel I think we want, e.g. not only American. I think the black and white version would also look nice on letterhead. I will readily admit that I did base my budded-cross idea on his (It took me a while to do this with a vector-based program). Other than that, I thought several of them were great, but a number looked either a.) too ethnic or b.) too unprofessional. two cents Joe ( talk » inspect » chat ) 23:04, November 15, 2005 (CST)

OK, I've decided to be a little more specific about the ones I like. I don't like HappyGrevling's silver-cross-logo.png. Don't ask why I just don't. I thought Magda's friends work were very nice. I do like a more square look for the Wiki logo and I thought these rectangular logos wouldn't work. Baker's were very nice. Simple. Maybe too simple for some. Rublevpupil's submissions were nice, especially Rublevpupillogo2.jpg, although these too were rectangular.
I like mine too. Aside from the fact that I am very (unfairly I am sure) late. I still don't like mine because a couple of the words are upside-down and I couldn't manage to convey the words OrthodoxWiki like I wanted to. I chose the quatrefoil because I felt it could symbolically represent the words shown and give the logo a sense of balance. Joe ( talk » inspect » chat ) 23:40, November 15, 2005 (CST)

Since I'm going to be away at the close of submissions (and probably the close of voting), I submit my vote as the first logo by HappyGrevling (world, with cross superimposed, with scroll around it); with big thumbs up to his other two. -- Pistevo 00:23, 31 October 2005 (CST)

HappyGrevling has submitted a potential winner, I think - I mean his most recent one, with the cross lying diagonally . My vote goes to this one. - Guldfisken 11:12, 3 November 2005 (CST)

I think I like the simplicity of the first one by Baker. (I'm attempting to put everyone's votes visually together here; please let me know if I get something wrong. —magda (talk) 07:54, November 15, 2005 (CST)

OK, I know it's probably lame to vote for my own logo, but hey, that's why I designed it the way I did -- because I like it! My vote goes to the Silver Cross logo (my 5th submission), with the gold-cross-world logo and the first Seal logo tied for second. - Happy Grevling

I vote for HappyGrevling's logo #1. I like it becuase it is 3-D and is dynamic. --Tanyechka

Although I would like to vote for my own logos, It would be a waste of a contest if the nicest looking one(s) were't accepted. Don't get me wrong, they are all nice, but I would have to go with HappyGrevling's one (the slanted 3d cross with 'www.OrthodoxWiki.org' over it in a curve style. I'd just have to go with that one. God Bless Everyone -- User:Danny 00:23, 15 November 2005

I like Baker 1 and 2 and also BeHappyGrevling 2,3 and 4. My personal preference is Baker 2, but I vote for BeHappyGrevling 3. User:Constantine 16:23 Bulgarian Time, 15 November 2005

I'm very happy that we have so many great logos to choose from. We'll close the submissions formally at midnight, but it's great if people's votes keep rolling in before that. Fr. John 10:41, November 15, 2005 (CST)

Yeah, maybe you're right about the silver cross logo, Joe. The more I think about it, it seems just a little odd that the cross is lying down. Something doesn't seem quite right about it. The cross should be a sign of victory, not defeat. Maybe the seal's better. But I can't even tell anymore! I'm too close to the project I guess! -H.G.