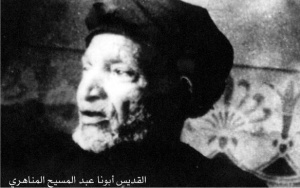 Saint Abdel Messih El-Makari was born in 1892 in the village of Abou Shehata, Mattay district, El-Menya governorate, Egypt. His parents were both Christians; his father's name is Henein and His mother's name is Esther. When he grew up, he wanted to be a spiritual warrior in the army of celibates, so he left the world and headed to the Monastery of St. Abba Samuel the Confessor in El-Kalamoun mountain. He did so several times, and each time his father would come to the monastery and bring him back home, and this was associated with the death of a large number of his father's cattles. At last, his father allowed him to do what he wanted, so he joined the Monastery of St. Abba Makar (Macarius) the Great in the desert of Scetes (Wadi El-Natrun) and became a monk. He led an extremely ascetic life and offered a superior example of true monastic life. Finally, he moved to El-Manahra village, Mattay district, and God honoured him with the gifts of prescience and discerning of spirits.

He did wonders and miracles exactly like those done at the hands of the apostles, and he used to cover up his spiritual gifts and virtues with some "odd" behaviour, but all people of Mattay and Samalout region testify to his holiness. Of those virtues we may mention:

First, his marvelous purity for which he was put to the test and came out victorious.

Secondly, he was distinguished for his strict asceticism and continuous vigilance. Whether he was at the monastery or out in the world, he spent his nights repeating one complete doxology after another and with tears asking for God's forgiveness for sinning or causing others to sin.

Thirdly, he was known for his wonderful humility. He fled from praise in spite of the fact that he had the gift of healing the sick.

Fourthly, he was very compassionate and gave everything he was given to the needy.

Fifthly, our Good God gave him the gift of prescience for he knew who was coming to see him and also knew the exact day he will die.

At the end, he was crowned with the crown of righteousness and good fighting, as he departed our world on Easter Sunday morning of the 6th of Barmouda 1669 A.M. (Coptic calendar)/April 14, 1963. Countless miracles continue to occur to this day through the intercession of St. Abouna Abdel Messih El-Makari.