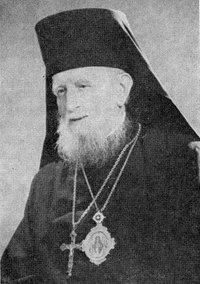 His Grace the Right Reverend Bishop Alexander (Semenoff-Tian-Chansky) of Zila was an titular bishop of the Ecumenical Patriarchate serving in the Russian Orthodox Exarchate in Western Europe.

Bp. Alexander was born on October 7, 1890, in St. Petersburg, Russia. He studied letters at the University of St. Petersburg. In 1921, he left his country for France, where he remained from 1925. At the age of 47 he started studying theology.

In 1953, he was ordained deacon and priest. On June 30, he was elected assistant bishop of Archbishop Georges (Tarassoff) of Syracuse, head of the Russian Orthodox Exarchate in Western Europe, receiving the title of Bishop of Zila. He was consecrated to the episcopacy in Paris on September 5, 1971, at the age of 80. He died in Paris on May 16, 1979.