Father Zakaria Botros is a Coptic priest from Egypt. He is a controversial figure in that country for his scriptural studies upon the combined holy books of Islam. He currently resides in the United States. 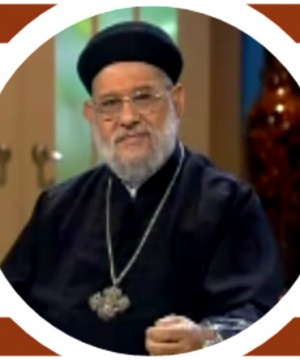 In the 1970s Father Botros was quoted to adopt many religious opinions that might be understood as opposing to the teachings of the Coptic Orthodox Church. He replied to that by publishing a book named Orthodoxy is my Denomination. He served in Ezbet Elnakhl a suburb of Greater Cairo, then he was tranferred by Pope Shenouda to serve in a church in Heliopolis .

The attitude of Father Botros has been a subject of both criticism and admiration by different people and Pope Shenouda III has criticized his style and mentioned that the problem between Botros and the Coptic Church is due to theological opinions of the Priest that did not find support in his church.[1].

Using state-of-the art satellite technology to bypass the efforts of Islamic governments to keep the gospel out of their countries, Botros is directly challenging the claims of Muhammad to be a prophet, and the claims of the Qu'ran to be God's word. He systematically deconstructs Muhammad's life, story by story, pointing out character flaws and sinful behavior. He carefully deconstructs the Qu'ran, verse by verse, citing contradictions and inconsistencies. And not only does he explain without apology what he believes is wrong with Islam, he goes on to teach Muslims from the Bible why Jesus loves them and why is so ready to forgive them and adopt them into His family, no matter who they are or what they have done.

He has a ninety-minute television program which is a combination of preaching, teaching and answering questions from often irate callers all over the world. It has become "must see TV" throughout the Muslim world. It is replayed four times a week in Arabic, his native language, on a satellite television network called Al Hayat ("Life TV"). It can be seen in every country in North Africa, Middle East, Central Asia, as well as all throughout North America, Europe, Australia, and New Zealand. And not only can it be seen in so many places, it is seen by an estimated fifty million Muslims a day.

At the same time, Botros is getting millions of hits on his multiple web sites in multiple languages. There, Muslims can read his sermons and study through an archive of answers to frequently asked questions. They can also enter a live chat room called "Pal Chat" where they are not only permitted but encouraged to ask their toughest questions to trained on line counselors, many of whom are Muslim converts to Christianity who understand exactly where the questioners are coming from and the struggles they are having.

As a result, Botros - on the air only since 2003 - has practically become a household word in the Muslim world. An Arabic newspaper has named him Islam's "Public Enemy #1." Millions hate him, to be sure, but they are watching. They are listening. They are processing what he is saying and they are talking about him with their friends and family. When Botros challenges Radical clerics to answer his many refutations of Islam and defend the Qu'ran, millions wait to see how the fundamentalists will respond. But they rarely do. They prefer to attack Botros than answer him. Yet, the more the Radicals attack him, the more well-known he becomes. The more well-known he becomes, the more Muslims feel compelled to tune in. And as more Muslims tune in, more are coming to the conclusion that Botros is right and in turn are choosing to become followers of Jesus Christ. Botros estimates at least 1,000 Muslims a month pray to receive Christ with his telephone counselors. Some of them pray to receive Christ live on their air with Botros. And this surely is only the tip of the iceberg, as it represents only those who are able to get through on the jammed phone lines. There simply are not currently enough trained counselors to handle each call.

(Discusses Fr Botros. A blog written by a Christian living in the Middle East, whose purpose is to discuss Islam and Christianity in ways that will be helpful for people of the other religion).