The Western Rite is a minority liturgical tradition within the Orthodox Church. Western Rite Orthodox Christians hold the full Orthodox faith in common with their brethren of the Byzantine Rite but celebrate Western forms of liturgy. Liturgical diversity, both between and within the East and West, was common before the Great Schism, yet not as diverse as like in today's time. At present, all of the bishops who care for such parishes are themselves followers of the Byzantine Rite.

In 1864, 44-year-old Joseph Julian Overbeck was chrismated into the Orthodox Church. Overbeck was a former Roman Catholic priest from Germany who had left the priesthood after becoming disillusioned with papal supremacy. He became Lutheran and married before joining the Orthodox Church. In 1866, he published Catholic Orthodoxy and Anglo-Catholicism, which contained the groundings for his work for the next twenty years. A year later, be began publishing a periodical, Orthodox Catholic Review, aimed at putting forward Orthodoxy and rejecting Catholicism and Protestantism.

The year 1867 saw Overbeck, with 122 signatures from the Oxford Movement, petition the Church of Russia for the establishment of a Western Rite church in full communion with the Eastern Rite. A seven-member synodal commission was then formed, and invited Overbeck to attend. The idea was approved, and Overbeck set about submitting a draft of the proposed Western liturgy, which added an epiclesis and the Trisagion hymn to the Tridentine Mass. This rite was submitted in 1871, and was examined and approved by the commission. Overbeck focused his efforts on the Old Catholic movement, who had rejected Papal Infallibility. He continued to engage in polemics with Catholics, Anglicans, and Orthodox converts using the Byzantine Rite.

In 1876, Overbeck issued an appeal to the various Holy Synods, traveling to Constantinople in 1879. There he met the Ecumenical Patriarch, who authorized him to deliver sermons and create apologetical material. In 1881, he had some success when the Ecumenical Patriarchate agreed that the West had a right to a Western church and rite.

However, his successes did not establish the Western Rite. Overbeck's marriage after his Catholic ordination was a canonical impediment to his ordination to the Orthodox priesthood; the Holy Synod of Greece vetoed his scheme amongst Orthodox Churches, pressuring Constantinople to retract its previous endorsement; the Orthodox Catholic Review ended its run; and by 1892, he admitted failure. Overbeck reposed in 1905.

One Western Rite parish briefly entered communion with the Orthodox Church in the Nineteenth Century. In 1890, a Swiss Old Catholic parish in Wisconsin pastored by Fr. Joseph Rene Vilatte approached Bp. Vladimir (Sokolovsky) about being received into Orthodoxy. Bishop Vladimir received them on May 9, 1891; however, Fr. Vilatte was consecrated to the episcopacy by hierarchs of the Syriac Orthodox Church in India, among them Metropolitan Alvares Mar Yulios of Goa, on 29 May 1892. He eventually led his parish back into Old Catholicism. 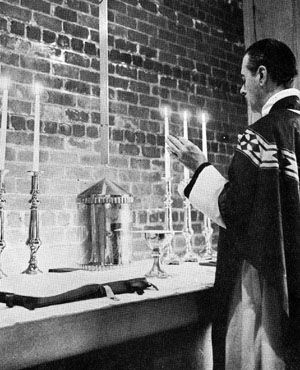 In 1911, Arnold Harris Mathew, an Old Catholic bishop, entered into union with the Patriarchate of Antioch but left the Church soon after. In 1926, the six-parish Polish Catholic National Church was received into the Polish Orthodox Church. It celebrated the Liturgy of St. Gregory, and flourished as Orthodox until wiped out by the Nazis. [1] [2]

St. Tikhon's involvement in the Western Rite has been more enduring. While he was bishop of the Russian mission in America, some Episcopalians were interested in the possibility of joining Orthodoxy while retaining some form of the Anglican liturgy. St. Tikhon sent the 1892 Book of Common Prayer to the Holy Synod, asking about the possibility. According to Fr. Edward Hughes, St. Raphael of Brooklyn composed the letter of inquiry. In 1904, the Holy Synod admitted its possibility, including edits for its use in an Orthodox manner. It concluded that such edits "can be carried out only on the spot, in America," and found it "desirable to send the 'Observations' themselves to the Right Rev. Tikhon, the American Bishop." Between communications, the Episcopalians who had petitioned withdrew. Thus, St. Tikhon could not receive any Episcopalians before returning to Russia in 1907. However, his involvement lay the groundwork for the reception and approved liturgy of some parishes in the Western Rite Vicariate [3] and later the Russian Orthodox Church Outside Russia (ROCOR).

The Antiochian Archdiocese has presided over the most stable and successful group of Western Rite parishes. The Archdiocese received the Society of Clerks Secular of St. Basil in 1961. Upon reception, the SSB became the Antiochian Western Rite Vicariate, and their leader, Alexander Turner, becoming an Orthodox priest and the Vicar-General of the Vicariate until 1971. At his repose, Fr. Paul W.S. Schneirla became Vicar-General. On January 1, 2009, Fr. Schneirla retired, and Fr. Edward Hughes became Vicar-General of the Western Rite.

Besides the parishes that were in the former Society, other parishes have been received into the Western Rite Vicariate of the Antiochian Archdiocese, especially because of the theological and practical devolution of the The Episcopal Church (TEC). Added to this, several Western Rite missions have been founded, some growing into full parish status.

The Church of Russia received a New York Old Catholic community in 1962 as Mount Royal Monastery, which later moved from Woodstock, New York, to St. Nicholas Cathedral in New York City under Archbishop John (Wendland) of the Russian Exarchate of North America. In 1975, this community was received by Archbishop Nikon (Rklitzsky) of ROCOR and was again relocated. In 1993, after the retirement of the Abbot, Dom Augustine (Whitfield) of Mount Royal, the prior of Mount Royal, Fr. James (Deschene) was blessed to found Christ the Saviour Monastery ("Christminster" colloquially) in Rhode Island, under Bishop Hilarion of Manhattan (since transferred). As of 2007, Christminster relocated to Hamilton, Ontario, Canada. Its present abbot is Dom James Deschene.

Western Rite Orthodoxy, in Australia and New Zealand, has arisen mostly from Anglican and Continuing Anglican communities. Metropolitan Hilarion (Kapral) of Sydney of ROCOR received some communities under his omophor; while others have been received by Bishop Gibran and Metropolitan Archbishop Paul, both under the Church of Antioch.

The Oriental Orthodox churches also have some Western Rite parishes. The Syrian patriarchate of Antioch consecrated Antonio Francisco Xavier Alvarez as Archbishop of Ceylon, Goa, and India in 1889, authorizing a Roman rite diocese under him; in 1891, the Syrians consecrated the aforementioned Joseph René Vilatte as archbishop for the American Old Catholics. Vilatte, however, returned to the Roman Catholic Church at the end of his life. Many independent churches now claim to be under his "succession".

The Western Rite liturgy, depending on its type, makes less use of the litanies than the Byzantine Rite. Celebrants wear distinctive Western vestments, and the faithful follow pious devotional customs particular to their tradition, as well.

In January of 1962, the official Western Rite Directory was issued, "establishing liturgical usages and customs and discipline," drawing on principles gleaned from the 1904 Moscow Synodal response to Saint Tikhon, the authorization of Western Rite offices by Metropolitan Gerassimos (Messarah) of Beirut, and the 1932 Russian Ukase of Metropolitan Sergius.[5]

By far the largest group of Western Orthodox parishes is represented by the Western Rite Vicariate of the Antiochian Orthodox Christian Archdiocese of North America. Other Antiochian Western Rite parishes exist in the Antiochian Orthodox Archdiocese of Australia and New Zealand. The Russian Orthodox Church Outside Russia (ROCOR) also has a small number of Western Rite parishes in addition to three monasteries: one located in Canada, one in Tasmania, and one in Florida. Missions and parishes of the ROCOR Western Rite use either the Rite of St. Gregory in one of varying uses (Sarum, Christminster, Mount Royal, or Overbeck), the Gallican Rite, or "The English Liturgy," an English Use service based upon the Sarum Use but which adapts a few elements of the 1549 Book of Common Prayer. Christminster Monastery in Hamilton, Ontario, Canada, is a Western Orthodox Benedictine monastery, which celebrates the Liturgy of St. Gregory. St. Petroc Monastery in Hobart, Tasmania, Australia, celebrates the Sarum Use. St. Petroc has a number of dependencies that follow its liturgical usage, as found in the Saint Colman Prayer Book.

Dom Augustine (Whitfield), the abbot of the Monastery of Mount Royal from 1963 until retirement, once remarked to St. John Maximovitch that it was difficult to promote Western Rite Orthodoxy, whereupon the saint replied: "Never, never, never let anyone tell you that, in order to be Orthodox, you must also be eastern. The West was Orthodox for a thousand years, and her venerable liturgy is far older than any of her heresies." [7] 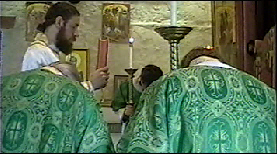 In late 2008, Metropolitan Hilarion received a hieromonk of the Milan Synod, Father Aidan (Keller), and blessed the publication of a new edition of his seminal work, Old Sarum Rite Missal for his personal prayers, while he serves a Byzantine parish in ROCOR. His liturgy had previously been blessed by the Western Archdiocese of the Milan Synod.

Western rite communities can also be found which are not or, are no longer, in communion with the mainstream Orthodox Church.

In addition, the Holy Synod of Milan, an Old Calendarist Synod (and therefore not in communion with the mainstream Orthodox Church), has a number of communities (under the central direction of the monastery and Archdiocesan center, the Abbey of the Holy Name) which worship according to Western rites, including its own version of the Sarum Use. This recension is different from the version of the Sarum Rite used within ROCOR before 2008.