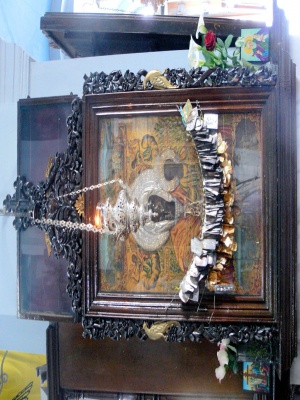 Tamata (votive offerings) placed in front of an icon of the Theotokos in the Cathedral of Chania, Crete. 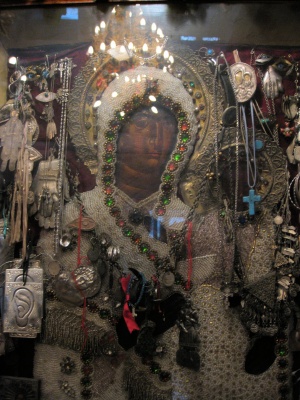 Votive Offerings (Greek: τάμα Tama ("vow"), pl. τάματα Tamata ("vows");[note 1] Latin: Ex Voto Suscepto, ("from the vow made")) refers to those things that are vowed or dedicated to God, the Theotokos, or a saint, and are in consequence looked upon as being set apart by this act of consecration, and as an expression of reverence and thanksgiving. Traditionally the spiritual practice of making vows that are sealed by the votive offering has been common among the faithful in the Orthodox Church, particularly in the Greek Orthodox Church.

"The vow usually takes the form of a commitment by the offerer to present some material gift to the supernatural benefactor if the benefactor grants the supplicant's particular request. Moreover, it is the making of the vow prior to the offering itself that, in the minds of [the faithful], distinguishes the votive offering from such other forms as the propitiatory or thank offering. While votive offerings are sometimes made in other situations of crisis or uncertain control such as the opening of a new business or the confrontation of one's son with the vagaries of the military draft, most frequently votives are employed in response to illnesses for which no other cure can be found. Promises and subsequent offerings are directed toward individual or local patrons, or toward saints believed to be especially powerful in dealing with certain maladies, such as the Panaghia (Virgin Mother) who is frequently called upon to aid in conception or childbirth, or Saint Paraskevi who is regarded as especially efficacious in treating afflictions of the eyes."[2]

The offerings themselves usually fall into one of three broad categories: (1) representations of the individual offerer, especially small gold- or silver-plated effigies of the bodily part to be cured...which are hung before the icon of the benefactor; candles the height or weight of the beneficiary; or personal valuables such as necklaces or rings; (2) adornments for the icon of the supernatural invoked, especially the gold or silver plating of parts of the icon such as the halo or hands; and (3) humbling acts taken up by votants in the service of the benefactor, especially crawling up the steps of a particular church, begging in behalf of the saint's church, or working for the church community in some self-effacing capacity.[2]

As the contractual nature of the vow implies, most offerings are made only after fulfillment of the offerer's request by the saint, and the actual presentations are made almost secretively, with no ostentation. The presentations occasionally take place in the presence of the offerer's immediate family, and often without the knowledge of the local priest.[2] Pilgrimage sites often include shrines that are decorated with many tamata.

According to Metropolitan Germanos II (Paraskevopoulos) of the Holy Metropolis of Ilias and Oleni in Greece, this is a subject however which is prone to much misinterpretation by Christians, who are thus removed from the true meaning of making vows, and therefore cause more harm to themselves than good.[1]

For example, several people are of the opinion that God and the Saints will grant their petition simply because they make a vow in an of itself. This is an error, because the Saints are not in need of our material goods, nor do they require a vow to be made before our prayers are heard by them. The Lord said "...when you pray, do not use vain repetitions as the heathen do. For they think that they will be heard for their many words. Therefore do not be like them. For your Father knows the things you have need of before you ask Him" (Matthew 6:7-8). It is enough that we have a strong faith and a pure heart and live a Christian life, and that our requests should me made for our spiritual well being.[1]

Furthermore, the way that certain vows are made comes across as making a bargain with God. For example, "Saint Paraskevi, please heal me and I will bring you a gold candle", or "God please help me with my exams and I will bring you...". This denigrates God and lessens the personality of man at the same time, while also making manifest our lack of faith.[1] In Dr. Teske's field study of the Greek-American community of Philadelphia, he observed that:

"The clergymen of the community, who personally demonstrate varying degrees of appreciation for the practice, uniformly allowed that the Orthodox Church, while tolerating the persistence of the tama, does not encourage it, due primarily to the possibility of it being taken for a form of bribery. Such accusations and luke-warm tolerance have had an effect both upon the practice itself and upon the attitudes of those who favor it."[3]

This is why careful attention is required if one is making vows. They should be of a spiritual nature to help with the purity of the soul and the holiness of one's life, because "God is Spirit, and those who worship Him must worship in spirit and truth." (John 4:24).[1]

The primary message that the votive contains and transmits would appear to be man's dependence upon and subservience to the will of God, and God's concern for man and occasional susceptibility to his influence. This notion is neatly packaged in the relation of the material or behavioral offering of the individual community member, to the symbolic locus of the offering's presentation, the Orthodox church. The Orthodox church building has long been recognized as a symbolic representation of the Divine Kingdom, and the pattern of its decoration "has the character of a clear and precise theological system." Within the context of such a large-scale, hierarchically arranged, symbolic representation of the Orthodox cosmology, votive offerings - especially those described above as being primarily representations of the individual - acquire a clear and precise significance. They constitute a means by which man is capable of inserting himself symbolically into an equally symbolic representation of the cosmos, a means by which man can express his place in the spiritual world and his relationship to other spiritual beings.[4]

(Dissertation in Folklore and Folklife. Presented to the Faculty of the Graduate School of Arts and Sciences of the University of Pennsylvania in partial fulfillment of the requirements for the degree of Doctor of Philosophy)