From OrthodoxWiki
Revision as of 04:15, March 2, 2016 by Magda (talk | contribs) (added cleanup tag)
(diff) ← Older revision | Latest revision (diff) | Newer revision → (diff)
Jump to: navigation, search
This article or section needs a cleanup to bring it to a higher standard of quality. Recommendation:
See talk page.
More detailed comments may be noted on the talk page. You can help OrthodoxWiki by editing it, especially to conform to the Style Manual and the suggestions in How to write a great article.

Vladyka Vladimir (Maurice Roman) was born in Milan in 1962. He is an Archaeologist by background, having studied the History of Classical Antiquity, Archeology, Byzantine History and History of the Church. He wrote his dissertation in Byzantine Canon and Civil Law at the Institute of Byzantine History (Dafist) at a prestigious Italian university. As a young boy, he was part of a parish of the Russian Orthodox Church - Moscow Patriarchate directed by Archimandrite Evloghij. 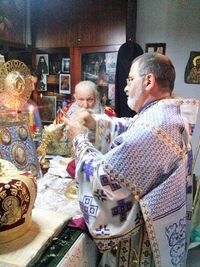 He was tonsured rasophore monk in 1984 then lector, subdeacon. In 1985 was ordained deacon and priest as Hieromonk and later in 1992 he was appointed to the dignity of Hegumen. He was later elevated to the dignity of Kathegumen in 1993 and in 1995 Archimandrite under the Jurisdiction of the Ukrainian Orthodox Church – Kyiv Patriarchate.

He was consecrated bishop on 6 December o.s./19 December n.s. 1995, Feast of St. Nicholas, by Metropolitan Vigil of Paris (Patriarchate of Kiev), Metropolitan Evloghij (Patriarchate of Kiev), and Bishop Vassilij (Patriarchate of Kiev) under the jurisdiction and Omophor His Holiness Patriarch Filaret of Kiev. Archbishop Lazar (Puhalo) of Ottawa, who he knew and met in Kiev during the enthronement of Patriarch Filaret (October 1995), sent as a member of the Holy Synod of Autonomous Orthodox Church of Milan, Western Europe and Canada (Ukrainian Orthodox Church – Kyiv Patriarchate) his agreement for the consecration. Vladyka Vladimir was in the same Holy Synod with Vladyka Lazar (Puhalo) of Ottawa and Vladyka Varlaam (Novakshonoff) of Vancouver, both consecrated under the Omophorion of the Patriarch of Kiev - Ukrainian Orthodox Church – Kyiv Patriarchate.