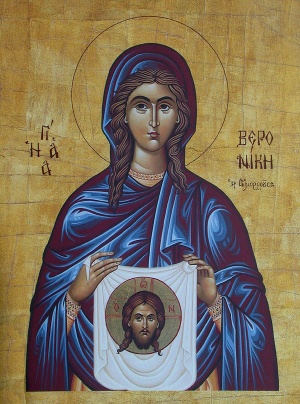 Saint Veronica, who wiped Christ's face as He went to his crucifixion.
Saint Veronica (also Berenice) is known as the woman who wiped Christ's face as He carried His cross towards Golgotha and as the woman whom Christ cured of the issue of blood, who is also traditionally identified as Herod the Great's niece. The Church celebrates her feast day on July 12.

The image of God was truly preserved in you, O Mother,
For you took up the Cross and followed Christ.
By so doing, you taught us to disregard the flesh, for it passes away,
But to care instead for the soul, since it is immortal.
Therefore your spirit, O Holy Mother Veronica, rejoices with the Angels!