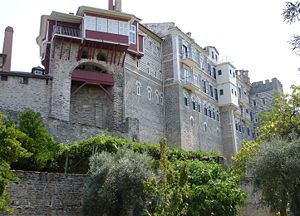 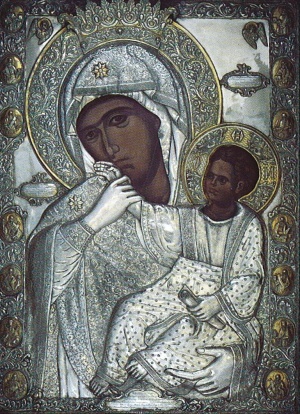 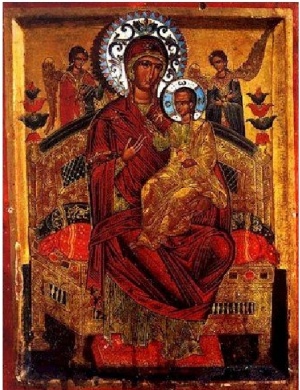 The Monastery of Vatopedi (or Vatopaidi), (Greek: Βατοπέδι or Βατοπαίδι) is one of twenty monasteries on the Mount Athos peninsula and is located on the northeastern side of the peninsula. It operates as a coenobitic monastery(a communal monastic community). As of 1999, it is inhabited by 80 monks and is second in hierarchical rank among the monasteries of the mountain.

Some sources associate the name of "Vatopedi" with the flora of the surrounding countryside (vatos = shrub, pedion = plain or ground);[1] others point to a traditional story in which Emperor Theodosios built the monastery to honor the saving of his son from shipwreck by the Theotokos; the child was found in a bush (vato = brier, paidi = child).

The legend says that the monastery was founded by Saint Constantine the Great. After him, the monastery was destroyed by Julian the Apostate and in the 4th century the Emperor Theodosios the Great built the monastery, ruins which were found after archeological excavations. The monastery was eventually destroyed by Arabs in 8th century and was rebuilt in late 9th century by three monks: Athanasius, Nicholas, and Antonius, who were nobles from Edirne (Adrianoupoli). They spoke with St. Anthanasius of Lavra which told them to rebuild the deserted Vatopedi. The major parts of the monastery were constructed either during the Byzantine period or later, during the eighteenth and nineteenth centuries, when building reached its peak. The monastery is monumental in size, with a tall wall in which the buildings are placed in triangular form.

The skete of St. Demetrios belongs to the Holy Monastery of Vatopedi and is an idiorrhythmic skete, resembling a settlement and consists of 21 kalyvae, most of which are now in ruins. It is located in the mountains; a half hour walking distance from the Vatopedi monastery and has been operating as a skete since the 18th century. The "Kyriakon" is dedicated to St. Demetrios. It was built in the 12th century; it was renovated and later expanded and was frescoed in 1755.

The Skete of St. Andrew is a huge building complex located on the road that connects Karyes with Daphne and follows a classic architectural paradigm of Athonian monasteries, i.e., it is surrounded by tall buildings overlooking an internal court.
It is called a skete because, according to the customs and the statute of Mount Athos, it is not possible to found new monasteries, besides the ones of the Byzantine era. It was built with the financial sponsorship of the Russian Czars, and many Russian monks practiced ascetic life here. Indeed, just before World War I, the skete was inhabited by approximately 700 monks. Nowadays five Greek monks reside here and have taken upon them to revive the skete and deal with the preservation of the icons and the maintenance of the premises.
The central church of the skete was built in 1867. It is the largest church on Athos, rising to 30m in height and extending to 60m in length. The relics of St. Andrew are kept in the interior of the church.

In addition to many relics, the monastery possesses a library of over 40,000 printed books and about 2,077 manuscripts. Relics include the Belt of the Virgin Mary (H Zoni ths Theotokou), which she gave to Thomas the Apostle during her transition to heaven.

There are a number of miracle-working icons in the monastery. The best-known icons are: