Ukrainian Orthodox Church in the USA

The Ukrainian Orthodox Church of the USA (UOC of USA) is a jurisdiction of the Ecumenical Patriarchate in the United States. It consists of three eparchies (dioceses), ruled by two diocesan bishops, including about 105 parishes and missions. Its current primate is His Eminence, Metropolitan Antony (Scharba) of Hierapolis. 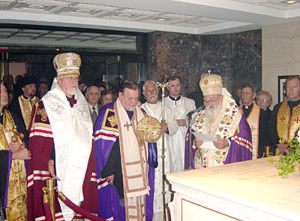 In the 19th and early 20th centuries, large numbers of Ukrainian Orthodox and Ukrainian Uniate immigrants came to the United States, with many of the latter group converting to Orthodoxy after their immigration. Around 1915, a number of parishes organized themselves into an independent Ukrainian Orthodox jurisdiction in North America, finding guidance in a visiting Antiochian hierarch, Metr. Germanos (Shehadi) of Zahle, whose leadership was sought out particularly by Ukrainians who had been under the Russian Metropolia, but regarded its hierarch of the time, Alexander (Nemolovsky), as being an "anti-Ukrainian" Russifier, who did not even regard Ukrainians as a separate ethnicity, but rather that "the Ukrainians are not a separate people nor a nation but only one of the Russian political parties."[1]

Eventually, a petition was sent in 1923 to the newly formed Ukrainian Autocephalous Orthodox Church (UAOC), a jurisdiction formed in the aftermath of Ukrainian independence in 1918, but which has never enjoyed canonical recognition in mainstream Orthodoxy.

The UAOC sent Metr. John (Teodorovich) in 1924 to head an American-Canadian diocese, arriving amid questions about the validity of his consecration, given that he had been ordained by UAOC bishops, whose consecrations were unrecognized by the mainstream of the Orthodox Church. John had great success in organizing parishes, due to his considerable administrative skill and his insistence on the liturgical use of Ukrainian (rather than Church Slavonic or English) as well as other Ukrainian cultural identifiers. In the aftermath of Ukrainian independence, nationalist feelings ran strong, and so an emphasis on Ukrainian identity was welcome to those who gathered under John.

Around the same time the Ukrainian Orthodox Church of America formed, an organization of former Uniate parishes who had disputed with the Vatican over the issue of parish property ownership and enforced clerical celibacy. On April 9, 1929, a meeting of 15 clergy and 24 laity was held in Allentown, Pennsylvania, at St. Mary's Ukrainian Catholic Church, in which those attending agreed to form a diocese of Ukrainian Orthodox Christians, though unlike those who had affiliated themselves with the UAOC, they wished to be part of a recognized canonical authority.

Another meeting took place in New York City two years later, at which Fr. Joseph (Zuk) was nominated to become their bishop. He was ordained in September of 1932 to be the bishop of the new group, becoming an auxiliary of Archbishop Aftimios Ofiesh, the primate of the American Orthodox Catholic Church (an early attempt at an autocephalous church in America by the Russian Metropolia). Bishop Joseph died only two years later, however, and in 1937, through the leadership of Joseph's successor, Bohdan (Spylka), the diocese was received into the Ecumenical Patriarchate by Archbishop Athenagoras (Spyrou) (then head of the Greek Orthodox Archdiocese of America), who ordained Bohdan in New York City. Bp. Bohdan at one point had rule over around 45 parishes, also having some initial success in attracting parishes away from the UAOC in America, due to his more moderate views.

During and after World War II, Ukrainian Orthodoxy in America changed radically, as a number of bishops came over from Europe who had been connected either with the UAOC, the Belarusian Autocephalous Orthodox Church (another unrecognized group), or the autocephalous Church of Poland (then unrecognized by Moscow, but recognized by Constantinople). These bishops tended to prefer Metr. John's organization over that of Bp. Bohdan, contributing to the swelling of the former's ranks to around 80 parishes, while the latter could claim perhaps only around two dozen (in both cases, however, many of these parishes were little more than missions or house chapels).

Bp Bogdan, with what backing the Greeks could give him, which was mostly moral and very little financial, continued to give some competition to the organization of Theodorovitch, now commonly called the "Ukrainian Metropolia," but it was a losing battle. In addition to the administrative ineptitude of Bp Bogdan, his very moderation in matters Ukrainian seemed to work against him. Bp Bogdan did succeed in attracting some Americans who were interested in Orthodoxy and most in ordination. Bp Bogdan ordained over a dozen native converts to the Orthodox priesthood without requiring any theological education and as might be expected the results were disastrous (an exception was Fr. Dmitry Royster who later transferred his allegiance to the Russian Metropolia and was consecrated Bishop in 1969) (p. 113).

In 1942, when persecution of the Church in Ukraine eased under the German occupation, a number of bishops were consecrated for the Ukrainian Orthodox there. One of these bishops, Mstyslav (Skrypnyk), came to America and joined the jurisdiction of the UAOC, serving in Canada. After some time, however, he came to the United States and joined Bp. Bohdan's group. He desired the unity of the two jurisdictions and worked to convince Metr. John to accept re-consecration as a condition for union.

On August 27, 1949, Metr. John (Teodorovich) was re-consecrated privately, thus ending some of the questions regarding his previous consecration and attracting a number of the parishes of Bp. Bohdan into his flock. Despite becoming the largest Ukrainian Orthodox jurisdiction in the United States at this point, the diocese was still not recognized as canonical by the rest of the Orthodox Church, and the hierarchs who re-consecrated John (Mstyslav (Skrypnyk) and Christopher (Contogeorge), exarch for the Patriarchate of Alexandria)) were themselves considered dubious by some (ibid., 113).

In 1950, the two rival jurisdictions held sobors (in the same cathedral in New York) at which unification was approved by both, and on October 13, a combined unification sobor was held, with both groups signing onto union. A number of clergy and parishes under Bohdan were unconvinced of the sincerity of the UOAC group, however, and convinced him to reject the union. Union was proclaimed, but it was not complete, lacking the support of Bohdan and those who had convinced him to remain separate. Mystyslav essentially returned to the UAOC jurisdiction, along with a number of Bohdan's parishes, while the union was celebrated on October 14 by those who participated.

In 1958, at the twentieth anniversary celebration in Allentown of the consecration of Bohdan, the sobor there raised him to the status of metropolitan and elected three candidates for consecration to to the episcopacy to assist him (in Canada, Western Europe, and England). Constantinople did not, however, recognize the elevation or choose to consecrate the candidates elected there. After 1957, Bohdan became less and less active, due mainly to advancing age, all the while continuing to lose parishes to the UAOC. He died on November 1, 1965, leaving no successor.

After the death of Bohdan, the Greek episcopacy resident in North America attempted to promote unity between the different Ukrainian factions, but met with failure. Eventually, Fr. Andrei (Kuschak) was elected by six parishes of the Constantinopolitan Ukrainians and consecrated to the episcopacy on January 28, 1967, by Abp. Iakovos (Coucouzis) and other bishops of the Greek Archdiocese. Bp. Andrei then ruled about a dozen parishes.

Metr. John was succeeded in 1971 by Mstyslav (Skrypnyk), who served as head of the diocese until 1990, when he was elected as patriarch of the UAOC, being succeeded by Bp. Vsevolod (Maidansky). (In the same year, the Ukrainian Orthodox Church of Canada was received into the Ecumenical Patriarchate.) Mystyslav died only three years after his election as patriarch, followed by enormous division in Ukraine. Ukrainian Orthodoxy in America, however, generally stayed out of the disputes there.

The same year as the unity was achieved, a tomos was issued by a metropolitan of the UAOC establishing a parish in Cleveland, Ohio, and ordaining a local priest with the title of Metropolitan Stephan (Petrovich). Additionally, in 1998 four parishes of the united jurisdiction (whose priests had been suspended) left Constantinople to become part of another unrecognized Ukrainian Orthodox group, the Ukrainian Orthodox Church - Kiev Patriarchate (UOC-KP).

The Ukrainian Orthodox Church in the USA is divided into two eparchies:

In total, there are about 105 parishes, two monasteries, and one seminary, St. Sophia Ukrainian Orthodox Theological Seminary in South Bound Brook, New Jersey. Besides the three hierarchs, the clergy consists of 106 priests and 15 deacons.[2] 15 of the parishes currently have either no pastor or are served by clergy in their deanery.[3]