From OrthodoxWiki
Revision as of 17:55, September 4, 2005 by Dimitrios Kiminas (talk | contribs) (Greek authorities write the letter gamma(Γ) as G, not Y on the Greek passports. Also the letter eta (Η) as I, not E. The site you mentioned copied the biography from a Russian site with wrong spelling)
(diff) ← Older revision | Latest revision (diff) | Newer revision → (diff)
Jump to: navigation, search 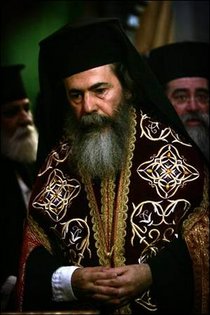 Theophilus (also spelled Theofilos and Theophilos; né Ηλίας Γιαννόπουλος [Ilias Giannopoulos]) was elected the 141st primate of the Church of Jerusalem on August 22, 2005. Formerly the Archbishop of Tabor, Theophilus was elected unanimously by Jerusalem's Holy Synod to succeed the deposed Irenaios I. Theophilus is regarded as having been more favorable to his deposed predecessor, which may assist him in bringing stability to the troubled patriarchate as Irenaios's supporters may thus unite around him and make peace with the synod. Upon his election, Theophilus said, "In the last few months we have had a lot of problems but with the help of God we will overcome them."[1]