Our venerable and God-bearing Father Symeon the Stylite or Simeon, also called "the Great" (c. 390-459) was a monk living in Syria. Stylite means one who lives on a pillar (style in Greek). He is celebrated by the Orthodox Church on September 1.

Symeon was born to a shepherd's family in the Cappadocian village of Sisan in Syria. When he was a youth, he was deeply moved after hearing the Beatitudes, and decided to join a monastery. His desire for fasting and asceticism grew quickly.

The abbot asked him to withdraw from the monastery due to his strict asceticism, fearing that the other brothers would imitate the extreme fasts. Symeon withdrew to live in an empty well in the nearby mountains. The monks searched for him and asked Symeon to return to the monastery, but he soon left again to continue his asceticism.

Crowds came to him to receive healing and to learn more about the Christian faith, but to avoid them, Symeon went up to a pillar and began to live there in a little cell, still devoted to prayer and fasting. He sat or stood in prayer for many weeks at a time, but he was hardly cut off from the world.

He wrote letters and even received visitors via a ladder. Many threatened and ridiculed him, but far more were inspired by his constant fasting and prayer. Those who were attentive to his teachings include the Emperor Theodosius II of Rome and his wife, Empress Aelia Eudocia, as well as the Righteous Genevieve of Paris. His letter to the Emperor Leo of Constantinople in favor of the Council of Chalcedon was highly respected. Many people came to listen to him and even to be baptized: 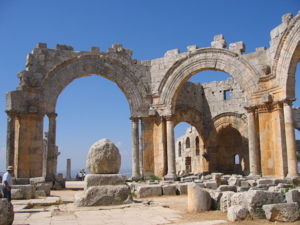 "Theodoret says that he became so famous in Rome that the Nomadic Arabs by the thousands believed in Christ and were baptized because of him; the King of Persia sent envoys to inquire into his way of life, and the Queen asked to be sent oil that he had blessed. He also was a great defender of sound doctrine, and confirmed the Orthodoxy of the Holy Council of Chalcedon for many who had been beguiled by the teachings of the Monophysites, including the Empress Eudocia, widow of Theodosius the Younger. After a life of unheard-of achievements and struggles, he reposed in peace at the age of sixty-nine, in the year 459." (1)

His body was taken down three days after his death, and his relics were sent to Antioch.

Thou becamest a pillar of patience and didst emulate the Forefathers, O righteous one:
Job in his sufferings, Joseph in temptations, and the life of the bodiless while in the body,
O Symeon, our righteous Father, intercede with Christ God that our souls be saved.

Thou soughtest the heights, though parted not from things below;
thy pillar became a chariot of fire for thee.
Thou becamest thereby a true companion of the angelic host;
and together with them, O Saint, thou ceaselessly prayest Christ God for us all.

The biography of Saint Symeon is found in the writings of the monk Anthony, who wrote it in Greek after witnessing the death of Saint Symeon. Another biography was written in Aramaic by two other followers: Symeo, son of Apollon, and Barhtar Barudan. The third source is the "History" of Theodoret, Bishop of Cyrrhus, in 444. (2)