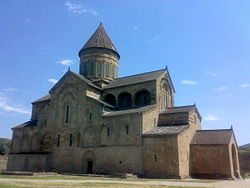 Svetitskhoveli Cathedral (Georgian: სვეტიცხოვლის საკათედრო ტაძარი, svet'icxovlis sak'atedro t'adzari; literally, the Living Pillar Cathedral) is a cathedral of the Church of Georgia. It is located in the town of Mtskheta, Georgia, 12.5 miles (20 km) northwest of Tbilisi, the capital of Georgia. The cathedral is known as the burial site of Christ's mantle and was the site for coronation and burial of the kings of Georgia.

The location of the Svetitskhoveli Cathedral has been site of the principal church of Georgia from the time St. Nino chose the site in the fourth century as the place for the first church in Georgia. Mtskheta is located at the confluence of the Mtkvari (Kura) and Aragvi Rivers. The original Svetitskhoveli church, a basilica, was built in fourth century during the reign of King Mirian III of Kartli (Iberia).

Through the years the cathedral has been damage frequently, notably by invading Arabs, Persians, and Timur, as well by earthquakes. The current cathedral was constructed in the eleventh century by the Georgian architect Arsakisdze. It was the largest church building in Georgia until the recently consecrated Sameba Cathedral in Tbilisi in 2004.

During the episcopate of Catholicos Melchizedek I from 1010 to 1029, the Svetitskhoveli Cathedral was rebuilt by the architect Arsukidze in the cross-dome style. The king of Georgia at that time was George II. In 1787, during the reign of King Erekle II (Heraclius), the cathedral was surrounded by a defensive wall, built of stone and brick that was designed with military attributes and gun emplacements. During archaeological excavations in 1963, the eleventh century patriarchal residence was found at the southern part of the wall. Within the church yard the remains of the two-story castle of Patr. Anton II was found.

During the restoration work of 1970/1971, that was conducted under the supervision of V. Tsintsadze, the remains of both the original St. Nino church and the foundation of the three story basilica built in the fifth century by King Vakhtang Gorgasali were discovered. Of note is that during the early years of Georgian church construction, the basilica was the dominant architectural type used for Georgian churches before the cross-dome style was adopted around the time of the end of the first millennium.

The basic structure of the cathedral is built of sandy yellow stone. Some red and green stone was used as trimming. The interior walls are painted with frescoes, most of which have not survived in their original state. In the 1830s, when Tsar Nicholas I of Russia was scheduled to visit Mskheta, the frescoes were all whitewashed, although in the end the Tsar never came. Today, after much careful restoration, some old remnants survive including fragments of a thirteenth century Beast of the Apocalypse and figures of the Zodiac.

The interior walls of the cathedral are decorated with icons, most of which are not original. The originals have been placed in the national museums of Georgia. Decoration of the church stonework also features carved grapes, a feature of many churches of Georgia that reflects the country's ancient wine-making traditions. The large figure of Jesus at the back of the altar was painted by a Russian artist in the nineteenth century. Most of the icons in the cathedral date only to the twentieth century. Of these some are copies of older icons and frescoes in other churches throughout Georgia.

Among other historical items possessed in the cathedral are a fourth century stone baptismal font thought used to baptize King Miriam and Queen Nana, and the remains of the original life giving pillar. The cathedral is the burial place of the Georgian kings, including Vakhtang Gorgasali, Erekle II, David VI, George VIII, Luarsab I, and George XII, the last Georgian king,

According to Georgian tradition, in the first century a Georgian Jew from Mtskheta named Elias was in Jerusalem when Jesus was crucified. Elias bought Jesus' robe from a Roman soldier at Golgotha and brought it back to Georgia. Upon his return to his native city, he was met by his sister Sidonia who upon touching the robe immediately died from the emotions engendered by the holy object. The robe could not be removed from her grasp, so she was buried with it. The place where Sidonia is buried, with Christ's robe,s is preserved in the Cathedral. Later, from her grave grew an enormous cedar tree. St. Nino ordered the cedar chopped down to build the church. From the cedar tree she had seven columns made for the foundation of the church. The seventh column, however, had magical properties and rose by itself into the air. After St. Nino prayed the whole night It returned to earth. Tradition also relates that from the magical seventh column a sacred liquid flowed that cured people of all diseases. In Georgian sveti means "pillar" and tskhoveli means "life-giving" or "living", hence the name of the cathedral. An icon portraying this event can be seen on the second column on the right-hand from the entrance of the church. The icon is reproduced widely throughout Georgia. It depicts Sidonia with an angel lifting the column in heaven. St. Nino is in the foreground while King Mirian and his wife, Queen Nana, are presented to the right and left.