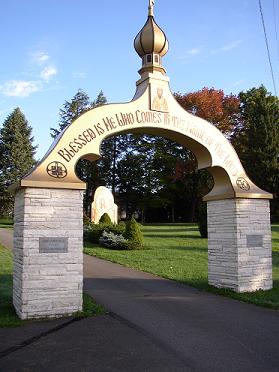 The stavropighial St. Tikhon's Orthodox Monastery was founded in 1905 by Archimandrite Arseny (Chagovtsev), later Archbishop), with the blessing of then Bishop of North America, later Patriarch of Moscow and all Russia, Confessor of Orthodoxy, St. Tikhon (Belavin), and was dedicated to the saintly patronage of St. Tikhon of Zadonsk, the heavenly patron of Bishop Tikhon. From the very beginning, the monastery drew Orthodox pilgrims from all corners of North America, and played a key role in Orthodox mission on the continent.

Knowing that monasticism is indispensable for the healthy flourishing of a local Orthodox Church, the young Hieromonk, later Archbishop, Arseny (Chagovtsev), who arrived in America in 1902, conceived the idea of starting a monastery in America. In his vision, the monastery would serve as a "mother house" for monastics who were engaged in mission work in various places in North America; they could return periodically for spiritual rejuvenation. Through Arseny's dedicated efforts, aided by Archbishop Tikhon's, suitable land was found: the Wagner farm in Western Wayne County, near the village of South Canaan. On June 26, 1905, the land for the new monastery was purchased for $2,580 by Archbishop Tikhon and Hieromonk Arseny -- the founders of St. Tikhon's Monastery. An orphanage was started at the same time.

The first Pilgrimage to St. Tikhon's Monastery opened on July 29, 1905. On July 31 the grounds were dedicated by Bishop Raphael (Hawaweeny), and on that day, the first Divine Liturgy was served, in an open place on a knoll where the Monastery Church now stands. A cross was planted on the spot. Bishop Raphael was the chief celebrant; among the concelebrating clergy was Fr. Alexander Hotovitsky and very likely Fr. John Kochurov as well. In later years these two priests would be martyred in Russia, being formally glorified as saints in 1994. The services that day were in honor of St. Tikhon of Zadonsk, who was Archbishop Tikhon's patron saint and partly for that reason, he was selected as the new monastery's patron saint. 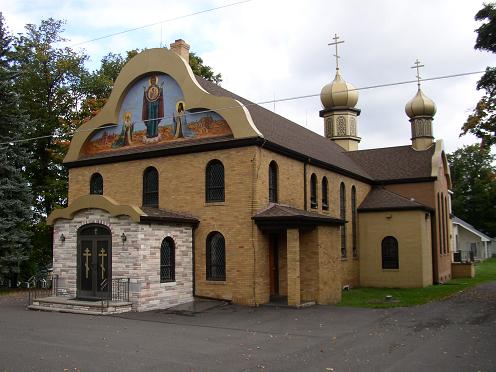 The official opening and consecration of the monastery took place on May 30, 1906. This occasion was the first of the annual Memorial Day pilgrimages. At the opening festivities gifts from Mount Athos arrived: an icon of the Theotokos "She Who Is Quick To Hear," and one of St. Panteleimon; both icons are still cherished by the monastery community. Hundreds of pilgrims from local parishes and from New York carried the icons in a cross-procession beginning at Mayfield. Travelling by train, the assembly was joined at Carbondale by Mitred Archpriest (Saint) Alexis Toth. The pilgrims -- whose numbers had greatly exceeded expectations, so that two chartered trains, with twenty coaches filled to capacity -- detrained in the forest near the monastery and the church hymns were sung as the procession, with the holy icons, advanced through the woods. After some eighty minutes, the pilgrims caught sight of a blue cupola with a three-barred cross, in the midst of a deep forest -- it was the monastery!

Two Divine Liturgies were served. Archbishop Tikhon and some of the clergy joined in consecrating the altar and celebrated Divine Liturgy in the new church. Following this, a second group, headed by Bishop Raphael and Fr. Alexis Toth, served Liturgy under the open sky. Two novices were tonsured to the rank of Riasaphor. That same summer, 1906, Patriarch Saint Tikhon stayed at the Monastery, living with the monks and attending the services.

Fr. Alexis Toth, who had been called the "Father of the Russian Orthodox Church in America" because of his great success in leading Uniates back to the Orthodox fold, was laid to rest in the monastery cemetery after his repose in 1909. Seven years later, his remains were transferred to a specially constructed tomb just back of the sanctuary of the monastery Church. An eyewitness of this transfer describes Fr. Alexis's remains as being totally incorrupt at the time. 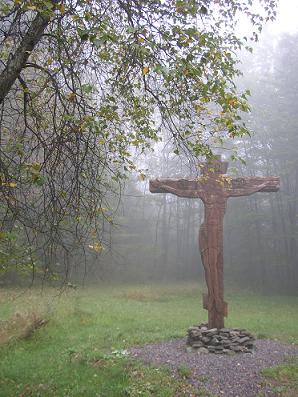 In the 1950's the monastery was greatly honored and enriched by the presence of a renowned Orthodox speaker, writer, and leader, St. Nicholai of Zicha, who spent his last years here and reposed here in 1956. The news, in 1987, of St. Nicholai's glorification brought joy to the monastery. Three years later, it rejoiced again at the glorification of the monastery's co-founder, Patriarch (Saint) Tikhon, and not too long after, in 1992, his well-hidden grave was miraculously discovered in Russia. The monastery has been blessed since then to obtain a fragment of his holy relics.

In 1994, the Holy Synod of the Orthodox Church in America proclaimed the sanctity of Fr Alexis Toth. His remains were removed from the tomb in back of the monastery Church. The service of glorification took place at the Memorial Day pilgrimage that year. The relics now rest in the right kleiros of the Church, in a beautiful, canopied reliquary of carved wood, topped by a bulbed, golden cupola. The monastery has also been blessed in recent years by receiving gifts of holy relics of St. Herman and St. Innocent of Alaska and St, Seraphim of Sarov. The monastic community rejoiced at the canonization in 1994 of Saints Alexander Hotovitsky and John Kochurov. Bishop Raphael, who in 1905 served the first Divine Liturgy there and dedicated the grounds, was proclaimed a saint by the Holy Synod in 1999, and his canonization also took place at the monastery at the Memorial Day pilgrimage that same year. Holy Relics of St. Raphael also are housed in the church. 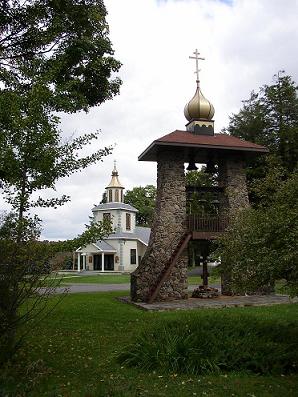 In 1965 the monastery church was extensively renovated and expanded, and the present monastery dormitory and dining hall were built. In 1988, to commemorate the Baptism of Russia, a new Millenium Bell Tower was built, as were many other shrines. An addition to the monastery dormitory that same year provided a new refectory and additional space. In recent years, construction has also proceeded on a skete in the nearby woods. The St. Arsenius of Konevits Skete now has accomodations for several monks, and a chapel is planned.

Prior to the founding of the Seminary, St. Tikhon's Monastery had played an essential role in Orthodox theological education in North America by providing preparatory coursework to those individuals who would later apply for formal seminary training at St. Platon's Seminary in Tenafly, New Jersey. During those early years, financial assistance to the North American Mission of the Russian Orthodox Church and to Orthodox theological education had been rendered by the civil and ecclesiastical authorities in Imperial Russia.