The St. Edward the Martyr Orthodox Brotherhood is a monastery of the Holy Synod in Resistance a ways south of London, England. It was established in 1982 in the Brookwood Cemetery (the largest cemetery in Europe) in Surrey to care for the relics of St. Edward the Martyr, King of England. The monastic community, led by Archimandrite Alexis, is small and largely made up of native Britons; on Sundays and feast days, laypeople (who are without a parish) often come to the monastery. Until January of 2007, the monastery was part of the Russian Orthodox Church Outside Russia.

The monastery publishes a monthly magazine, The Shepherd, which is available with a suggested donation.

On the property, there were originally two chapels and five acres of land within Brookwood Cemetery. The larger chapel, now the church and shrine of St Edward, was originally built in c.1909-10 as the second Anglican chapel. The smaller chapel was built in 1854 for the opening of Brookwood Cemetery and designed by Sydney Smirke, and was the original Anglican chapel. Now, however, the smaller chapel has been converted for parochial purposes and for living quarters for members of the Brotherhood. 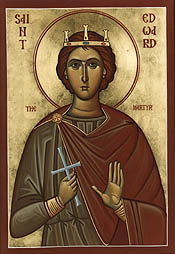 The Brotherhood chants the services daily at the shrine of St. Edward, augmented on Sundays and feast days by the parishioners of the mission parish attached to the monastery.

Links about the High Court injunction