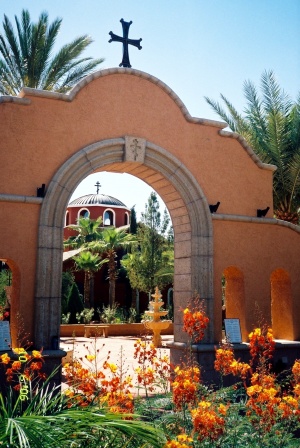 St. Anthony's Greek Orthodox Monastery is a monastic community for men in the Greek Orthodox Archdiocese of America. It is located in Florence, Arizona, and the spiritual father of the monastery is Elder Ephraim.

The community was founded in 1995 by six Athonite monks along with Elder Ephraim, former abbot of Philotheou Monastery on Mount Athos, with the blessings of His Eminence Metropolitan Anthony (Gergiannakis) of San Francisco (of blessed memory). In time it has grown to approximately 42 monks, and is continuing to grow, providing the training grounds for the monks of other Greek Orthodox monasteries in America that are under the elder's spiritual guidance.

The community consists of men living the monastic tradition of a Christ-centered prayer life for the monastic members. Unlike on Mount Athos, both men and women are equally encouraged and welcome to visit as pilgrims. It is not uncommon to see men, women, and children attending Liturgy with the monks.