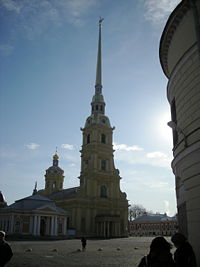 The Cathedral of Ss Peter and Paul, the oldest church in St. Petersburg, is located within the Peter and Paul Fortress on an island near the northern bank of the Neva River. The cathedral was built under the direction of Tsar Peter I in the early eighteenth century and became the burial place for members of the Romanov dynasty. The original wooden church was the first church in the city of St. Petersburg where it remained as the current stone church was built around it.

Soon after establishing the fortress on Hare (Enisaari) Island near the mouth of the Neva River Tsar Peter I directed the building of a church, dedicated to the Apostles Peter and Paul, within the fortress. Construction of the original wooden church began on June 29, 1703. This church was consecrated by Metropolitan Job of Novgorod on April 1, 1704 in the presence of Tsar Peter I and soon became an important social and spiritual center in the new city.

On Tsar Peter’s birthday, May 30, 1712, construction of the current building, a stone church, began on the same site. The new building, that was the first stone church in St. Petersburg, was built around the wooden church. The wooden church remained in use until it was dismantled and moved to a different site in 1718-1719. The architect of the new church was Domenico Trezzini, the designer of the Peter and Paul Fortress, who continued the direction of construction on the island until 1732.

With Peter I’s death, the cathedral inherited its role as the burial place of the Romanov rulers. After his death on January 28, 1725, Peter’s body was kept in a temporary wooden chapel for six years until it was interred in the new stone cathedral on May 29, 1931, thus establishing the cathedral as the imperial sepulcher. Today, there are thirty two graves in the cathedral, although the one for the Grand Duchess Alexandra Georgiyevna, daughter of King George I of Greece, is empty after her body was reburied in Athens, Greece in 1939.

The nave of the Ss Peter and Paul Cathedral in St. Petersburg, Russia

On the feast day of the Holy Apostles Peter and Paul, June 29, 1733, the cathedral was consecrated in the presence of the Empress Anna, the court, and the diplomatic corp. The cathedral became the chief place of worship in the city for many years until it became a court cathedral.

Over the years changes have been made to the cathedral that have altered it from that envisioned by Trezzini. Late in the eighteenth century, porticos were added to the west and south entrances. The cathedral remained unheated until provisions were added for heating the building in 1811. In 1873, a fresco of Christ with the Apostles Peter and Paul was added to the eastern façade of the cathedral. The most notable changes have been to the bell-tower. Originally built of wood, the tower suffered from hurricane force winds, lightening strikes, and fires that seriously damaged the tower on occasions and required replacement of the weather-vane angel. During the period of 1857 - 1858, the present angel was installed as part of the replacement of the wooden tower, that was also showing rot, with a metal one that also increased the height of the bell-tower to just over 400 feet (122.5 meters).

The graves of the Romanov dynasty in the St Peter and Paul Cathedral.

Late in the nineteenth century concern arose that there would be insufficient room in the cathedral for future imperial burials. To provide for future burial sites, the Grand Ducal Burial Chapel was built as an annex at the east end of the cathedral. The design of the chapel included provision for sixty burial chambers. The chapel was consecrated in the name of St. Alexander Nevsky on November 5, 1908. The first burial in the chapel was three days later when Grand Duke Alexei Alexandrovich was interred. By 1916, thirteen members of the Romanov family were buried in the chapel. No further burials were made until May 29, 1992 when the Grand Duke Vladimir Kirillivich and his wife Victoria Fiodorovna were reburied from Coburg, Germany in accordance with his will. In 1998, the remains of the martyred Emperor Nicholas II and his family were buried in the St. Catherine Side-Chapel of the cathedral.

The Cathedral of Ss Peter and Paul reflects Peter I’s interests in Western Europe. The appearance of the cathedral followed the early Baroque style as Trezzini executed Peter’s desires. In this, the design of the cathedral borrowed much from the protestant churches of western Europe, particularly Dutch architecture. The basic execution of Peter’s ideas was accomplished between 1722 and 1727 by a team of over forty architects from Moscow under the leadership of Ivan Zarudny that combined Lutheran architectural elements with icons painted in the Western style of the Roman Catholic church.

The Royal Doors of the Ss Peter and Paul Cathedral

Over the years the interior decoration has been refurbished often as temperature and humidity have been the enemy especially of the woodcarvings in the cathedral. The composition of the iconostasis frame by Trezzini, that he drew from the western European Baroque concepts, was implemented in Moscow by a team of woodcarvers under Ivan Zarudny, then shipped to St. Petersburg, and assembled in the cathedral. The arrangement of the figures (icons) on the iconostasis was drawn up by Peter I and Archbishop of Novgorod, Theophanes Prokopovich. The set of forty three icons for the iconostasis was created by the Moscow iconographer A. Merkuryev (Pospelov) and his team. Ravished by the hard climate in St. Petersburg, the wooden Royal Doors were replaced in 1866 with exact copies that were cast in bronze and then gilded.

The pulpit in the Ss Peter and Paul Cathedral.

The paintings within the cathedral have been refurbished repeatedly. The fresco of the Holy Spirit, depicted in the dome as a dove, has been repainted many times. Surviving from the original decoration of the interior are the seven paintings of the cycle on ‘‘The Passions of Christ’‘, rendered between 1729 and 1732 by the Russian painters Andrei Matveyev and Vasily Ignatyev and the Swiss George Gsell. In 1877, a set of sixteen paintings were created in the drum under the dome that depict subjects from the Old and New Testaments. Also, during the 1870s new paintings were created in the central and side aisles by the painters Ksenofontov and Boldoni. Even with the all the refurbishing the interior decoration of the cathedral has, on the whole, remained largely unaltered from its original appearance.