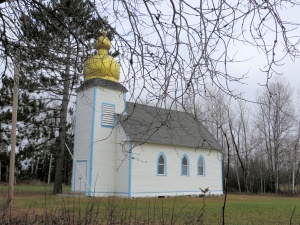 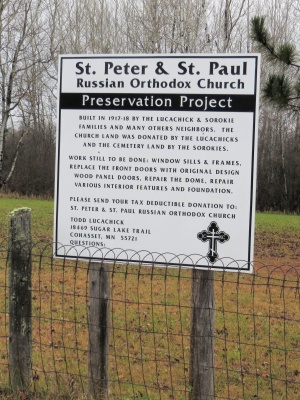 Ss. Peter and Paul Church is a church located near the unincorporated community of Bramble, Minnesota, circa 70 miles south of International Falls and near the small communities of Orr and Rauch, in the southeastern corner of Koochiching County. Founded by Orthodox families who had come to the United States in search of a better life, the Lucachick and Sorokie families donated the land for the church and the cemetery. The church building itself was built in 1917-1918, and the iconostasis was installed in 1926.

The active life of this parish was short-lived, as many of the people who had settled in the area for land left as they realized that the conditions of northern Minnesota only make for marginal farming. Regular services ceased sometime during the 1930s, and the church and the property are in private hands.

In the 1980s, Ss. Peter and Paul was added to the National Register of Historic Places not just on account of being one of the few—and earliest—Orthodox churches in northern Minnesota, but because it stands as one of the few structures remaining in the area testifying to the pioneers who once came out to settle the area.