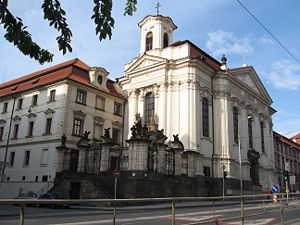 The Ss. Cyril and Methodius Cathedral in Prague, Czech Republic, is the principal church in the Metropolitan Council of the Czech Republic. The existing structure had its origins as a Roman Catholic church built in the eighteenth century. During World War II, the cathedral was the scene of the last stand of a number of Czech patriots who had assassinated Reinhard Heydrich, the Nazi SS Obergruppenfuhrer and General of Police.

According to oral tradition, the site where Ss. Cyril and Methodius Cathedral stands was the site of a small church built by Duke Borivoj I and dedicated by St. Methodius himself. This link is based historically upon early and continuing reference to the name "Na Zderaze" for the existing church building. In 1091, the Czech lord Zderad was killed during the siege of Brno and was buried in the earlier church which was near Prague. Zderad's name was then immortalized in the name of the street "Na Zderaze" which is adjacent to the cathedral, thus establishing a connection to this site that was hallowed by St. Methodius.

From 1115, the church of Ss. Peter and Paul stood on the site of the present church, around which the Knights of the Cross built the Zderazsky monastery. During the Hussite wars the church was largely destroyed, leaving only a part of the choir standing. In 1705, the Roman Catholic archbishop of Prague, Brener, established a retirement home for priests on the site of the monastery next to which a church was later built.

Ss. Cyril and Methodius Cathedral was originally built as the St. Charles Borromeo Roman Catholic Church during the years of 1730 to 1740. Construction was started under the direction of Pavel Ignac Bayer, but in 1733 Kristian Spannbruker and Kilian Ignac Dienzenhofer assumed direction of the construction and completed the project in 1740. The dedication was of St. Charles Borromoro, who had been archbishop of Milan (1538-1584). The church was part of a home for retired Roman Catholic priests and contained a crypt with alcoves for the priests' tombs.

The church and home were closed on January 12, 1783, by the Austrian Emperor Josef II and transformed, in 1785, into a army storehouse and barracks respectively. From 1869, the complex was used as a Czech technology center. In 1885, the level of Resslova Street was lowered giving the church an appearance of greater height.

When Bp. Gorazd revived the Czech Orthodox Church in 1921 he and the church officials began looking for an existing, unused church building for their cathedral. On July 29, 1933, the council of ministers, in response to a request by the Czech Orthodox Eparchy (diocese) granted use of the former St. Charles Borromeo Roman Catholic Church on the corner of Resslova and Na Zderaze streets to the Czech church under a long term lease. The lease stipulated a number of improvements that the Czech Eparchy would have to make to the church, including a new entrance and renovations of the interior.

Consecration of the first Orthodox Church in Prague was held on September 28, 1935, on the feast of St. Wenceslas. The original date of October 14, 1934 was postponed due to the death of King Alexander I of Yugoslavia. The consecration service was led by Bp. Gorazd, assisted by the Serbian Metropolitan Dositej, Sub-Carpathian Bp. Damaskin, and the Russian Bp. Sergiy. The cathedral was dedicated to Ss. Cyril and Methodius, who had originally brought Orthodox Christianity to Moravia and from whom the church in the Czech Lands is descended. Relics of two saints, the martyred St. Averky and the Serbian archbishop, St. Arseny were interred beneath the altar.

From its consecration, the cathedral of Ss. Cyril and Methodius has been linked by the Prague press to its Byzantine missionary past and to Ss. Cyril and Methodius, noting that Methodius had been there, presiding over worship, and had baptized the first Czech Duke Borivoj and his wife, Ludmila, according to the Eastern Church rite. The press further noted that the Czech Orthodox Church considered the Duke and his wife to be members of their church just as the church does with Ss. Cyril and Methodius. The first priest assigned to the parish was Fr. Petr Kauer, with Fr. Vladimir Petrek as his assistant. On August 11, 1937, Fr. Petr died and was succeeded by Fr. Vaclav Cikl on January 31, 1938.

The cathedral was the scene during World War II of the last stand of a number of Czech patriots who had assassinated Reinhard Heydrich, the Nazi SS Obergruppenfuhrer and General of Police and the newly appointed Reichsprotektor of Bohemia and Moravia. After completion of the military operation by the Czech parachutists on May 27, 1942, seven members of the group took refuge in the crypt of the cathedral with the assistance of Fr. Vladimir Petrek, layman Jan Sonnevend, Bp. Gorazd, and others. They had planned to stay a short time, but one of the parachutists betrayed them before they could make their escape. On June 18, the cathedral was surrounded by 800 Gestapo soldiers, whose orders were to capture the group alive. Three of the Czech patriots died defending the nave of the cathedral, followed by the storming of the crypt by the Gestapo after it was discovered. There, the remaining four Czechs fought until their last four bullets that they used on themselves.

Bp. Gorazd took the path of self-sacrifice, with which we are familiar from biographies of the holy martyrs, in an attempt to end the Nazi terror that had begun. He wrote letters to the Prime Minister, the Minister of Education, and the office of the Reichsprotektor taking full responsibility and was ready to undergo any punishment, even death. The only reply he received was his arrest on June 25. The reprisals continued as the population of the village of Lidice was decimated. The men were shot, the women sent to concentration camps, and children deported to Germany for adoption. After which the village was razed to the ground.

The trial of the members of the Czech Orthodox Church was held on September 3, 1942, after which Bp. Gorazd, Fr. Cikl, and council chairman Sonnevend were executed by a firing squad on the next day. Fr. Petrek was executed on September 5. For aiding the parachutists, 263 Czechs were arrested, transported to the Mauthausen concentration camp, and shot to death on October 24, including nine members of the cathedral’s congregation: Marie Ciklova, wife of the dean; Marie Gruzinnova, Bp. Gorazd’s secretary; Marie Sonnevendova, wife of the council chairman; Ludmila Rysova, choir member; Vaclav Ornest, the sacristan, his wife Frantiska Ornestova, and daughter, Miluse Ornestova, a choir and youth group member; Karel Louda, choir member; and Marie Loudova, also a choir and youth group member. In all, the Orthodox Church lost 13 sons and daughters.

With the end of the war in 1945 the devastated cathedral was returned to the revived Orthodox Church. The first liturgy was held in the courtyard in front of the church building on May 13, 1945. On third anniversary of the "Heydrich Terror," June 17, the first memorial service for the victims of the terror was held in the overflowing cathedral. The cathedral was re-consecrated on July 5, 1947 as it had been desecrated in the Gestapo attack of 1942. In 1946, the apartment of the martyred sacristan, Vaclav Ornest, was converted into a chapel as a memorial to Bp. Gorazd and was consecrated on November 12, 1947. A bronze memorial plaque, unveiled on October 28, 1947, was placed on the exterior of the cathedral emblazoned with relief portraits of the parachutists who died in the cathedral as well as Bp. Gorazd, who was glorified on September 4, 1987.

Since then, the cathedral has been restored further, including new iconography and painting. Through the years since World War II, memorial services have been held annually on June 18 in remembrance of the victims of "Heydrich’s Terror". The annual remembrance has culminated in the establishment of the Orthodox Cathedral of Ss. Cyril and Methodius as A National Memorial to the Heroes of the Heydrich Terror - A Place of Reconciliation. This took place on the 60th anniversary, September 28, 1995, of its original consecration as the first Czech Orthodox cathedral.