Difference between revisions of "Sergius of Radonezh" 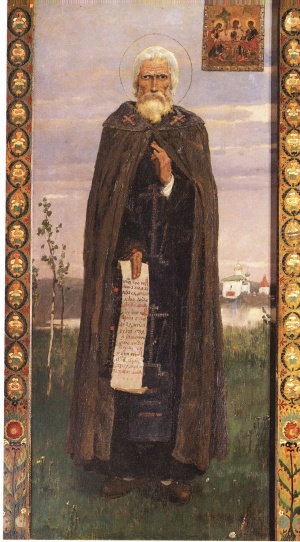 Icon of St. Sergii Radonezhsky written for Abramtsevo church by Viktor Vasnetsov, 1882.
Our father among the saints, the Venerable Sergius of Radonezh was a leading Russian monk in the fourteenth century who founded the Holy Trinity monastery north of Moscow. He is much revered and has a special place in Russian monasticism and the nation of Russia. An ascetic, he was deeply humble and had a firm faith in God’s help. After his glorification the monastery he founded became known as the Holy Trinity-St. Sergius Lavra.

Sergius Radonezhsky (Сергий Радонежский) was born into a boyar family near Rostov. His parents were named Kyril and Maria, and he was given the name Bartholomew at birth. His birthdate is traditionally held to be May 3, 1314, although this date is uncertain, as other years recorded are 1319 and 1322. He was the second of three brothers, Stephen being the eldest and Peter the youngest. Because the family became impoverished when Kyril was dispossessed of his properties under Grand Duke Ivan Danilovich of Moscow, they moved to the village of Radonezh around 1328. As Bartholomew grew up, his ability to learn did not match that of his brothers. Then one day he met an old monk who, after Bartholomew explained his difficulties, gave Bartholomew a small piece of communion bread with the blessing, "Take and eat it, this is given to you as a sign of God’s grace and for understanding of the Scriptures". From that meeting on Bartholomew found his lessons easier.

In 1334, after the death of his parents, Bartholomew moved to to Khotkovo near Moscow, joining his widowed older brother Stephen. In 1337, he was tonsured a monk with the name Sergius and was ordained to the priesthood. In seeking a more secluded place, he and his brother found such a place in the deep forest near the Marovets hill and built a small cell and a simple chapel dedicated to the Holy Trinity. This was 1340. The brothers lived a secluded life in the forest, and in time Stephen found the life of seclusion difficult and left Sergius to live in Epiphany monastery in Moscow. With the departure of his brother Sergius lived alone for a number of years. The wild animals seemed to recognize him as packs of wolves and bears would come to his hut but would not harm him. One bear came to his hut to share Sergius’ last piece of bread with him. Gradually people learned of Sergius and approach him for spiritual guidance. Soon, the cell grew to a small hermitage of twelve monks. The hermitage of the Holy Trinity soon became the spiritual center that eventually became the Holy Trinity-St. Sergius Lavra (Troitse-Sergiyeva Lavra).

The news of his life and works of wonder spread far and wide. The Patriarch of Constantinople, Philotheus sent him a charter confirming the new rules of community cloister life established by Sergius at the Holy Trinity Monastery. Metr. Alexei of Moscow honored Sergius as a friend and entrusted him in the tasks of reconciling differences among the princes of Moscow and Russia. He wished to honor Sergius with the award of a gold cross, and even offered in 1378 to make Sergius his successor as metropolitan of Moscow. But, these honors did not fit with Sergius’ ascetic life, and he refused both.

In the Russian struggles with the Tatar Khan Mamai, Sergius blessed the Prince Dimitri Ivanovich as he departed for battle in 1380 with the words, "Go fearless prince and believe in God’s help". Dimitri’s victory at the Battle of Kulikovo was decisive in the history of Russia.

Sergius has held a special place in the history of Russian monasticism. His community at Holy Trinity served as the model of secluded ascetic life organized as communities outside the limits of towns and cities. He himself was a model of asceticism. While not a learned man nor a great preacher, he was a man committed to poverty and utter sincerity. He was deeply humble and had a staunch faith in God’s help. He committed to giving help to all who sought his help with loving attention. He was a true leader who led his monks in work and service by setting an example. He established a number of monastery schools and taught farmers better methods of farming.