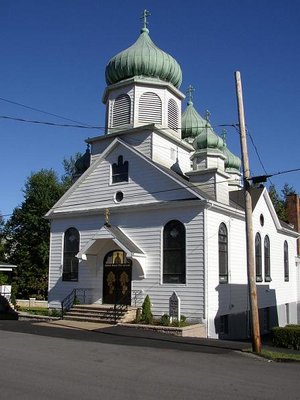 St. Basil the Great Russian Orthodox Church (Simpson, PA), which has been in the MP, the OCA, and the ROCOR.

The ROCOR and the OCA have a complicated history of cooperation, rivalry, and sometimes outright hostility. These two jurisdictions, the Russian Orthodox Church Outside Russia and the Orthodox Church in America, both have their origins in the Church of Russia (a.k.a. the Moscow Patriarchate or MP), and their histories as clearly identifiable entities both stem from the Bolshevik Revolution in Russia in the early 20th century.

In the early 1980's, Bishop Herman (Swaiko) of Philadelphia, the OCA's bishop for Eastern Pennsylvania, decreed that all of his parishes would begin using the Revised Julian Calendar. Some were already using it, but others had been using the Julian Calendar steadily up to that point.