Difference between revisions of "ROCOR and OCA"

The ROCOR and the OCA have a complicated history of cooperation, rivalry, and sometimes outright hostility. These two jurisdictions, the Russian Orthodox Church Outside Russia (ROCOR) and the Orthodox Church in America (OCA), both have their origins in the Church of Russia (a.k.a. the Moscow Patriarchate or MP), and their histories as clearly identifiable entities both stem from the Bolshevik Revolution in Russia in the early 20th century.

In examining this history, other names are used for the pre-1970 OCA, the Russian Orthodox Greek Catholic Church in America (its official name) and the Metropolia (its common name). The ROCOR is also referred to as the Karlovtsy Synod (from its seminal formations in Serbia) or simply the Synod, the Russian Orthodox Church Abroad, or ROCA.

The beginnings of the OCA and the ROCOR as distinct from the Church of Russia are in the early 20th century Soviet takeover of the Russian state. When the monarchy in Russia fell and the Church of Russia began being persecuted, a group of Russian bishops fled from northern Russia, joining with some in the southern portion of the country and organizing themselves via meetings in Constantinople and Serbia. These came to be known as the Russian Orthodox Church Outside Russia.

Meanwhile, the Metropolia, the Russian diocese in America, which was becoming increasingly less Russian and more Carpatho-Russian (with the reception of many thousands of former Uniates under the leadership of St. Alexis of Wilkes-Barre), began a winding path toward independence from the jurisdiction of Moscow.

Patriarch St. Tikhon of Moscow, who had previously been a bishop in America, issued an ukase on November 20, 1920, declaring that the bishops of the Church of Russia were to see to their own organization until such time as communication with the central church administration could be coherently organized again. The Metropolia took this as a cue to declare in 1924 a state of "temporary self-government." From that point until 1970, the Church of Russia considered the Metropolia to be in schism, and many of the other Orthodox churches regarded the Metropolia as uncanonical and avoided contact with it.

The bishops which came to form the ROCOR took St. Tikhon's ukase as the basis for their own self-administration, organizing themselves in 1920. There never has been a formal break in communion from ROCOR with the Church of Russia, though such a break has been at several times directed from Moscow to the ROCOR.

In examining the historical accounts published by both bodies, a notable discrepancy comes to the fore. The OCA's histories describe the OCA as being the direct heir to the original Russian missionary work in Alaska and thus as the heir to Russian jurisdiction in America, especially seeking to dissociate itself from the ROCOR. In Bishop Gregory Afonsky's book about the history of the OCA 1917-1934, he says that "The Metropolia... has never been part of the Karlovtsy Synod in Exile"[1]. Further, on the OCA website in the section regarding the 6th All-American Sobor of 1937 in New York, the claim is made that the ROCOR actually was made part of the Metropolia, confirming a 1935 agreement made in Serbia between the Metropolia's primate and the ROCOR synod:

Moreover, Metropolitan THEOPHILUS had traveled to Serbia where, under the leadership of the Serbian Patriarch, an agreement was signed by the leading hierarchs of the Russian Orthodox Church Outside of Russia (ROCOR) along with other exiled Russian hierarchs throughout the world forging a peaceful coexistence. Under this agreement, the American Church was to retain her administrative autonomy while maintaining close relations with the ROCOR Synod and being accountable to it only in matters of faith. The parallel jurisdictions of the Metropolia and ROCOR were thus eliminated and the four ROCOR hierarchs in North America along with their clergy and parishes were integrated into the Metropolia. The vote of the Sixth Sobor on this loose affiliation with the ROCOR was as follows: 105 for, 9 against, 122 abstentions. The large number of abstentions reveals that there was much apprehension on this issue at the council. However, in approving the matter, the council delegates showed respect and obedience to Metropolitan THEOPHILUS' primatial leadership.[2]

The website then goes on to describe this "integration" as merely a "loose association," which seems to contradict the notion that the two bodies were truly integrated, eliminating "parallel jurisdictions" and making the Metropolia accountable to the ROCOR in matters of faith. On another portion of the website, regarding the 7th All-American Sobor in 1946, the relationship then being severed with the ROCOR is described as having been a "temporary arrangement"[3].

The nature of the association between the Metropolia and the ROCOR is characterized quite differently by ROCOR writers:

From 1920-1926 and 1935-1946 they recognized the authority of the bishops of the Russian Orthodox Church Outside of Russia; that this is so is almost embarrassingly obvious and true [proof of this recognition of authority can be seen in the list of hierarchs in the Russian Desk Calendar Reference for 1941—see original article for copy of this page from the calendar—PB]. From 1946-1970 they were in effect under no one, for five bishops separated themselves from the ROCOR, but would not recognize the authority of the Moscow Patriarchate, and had absolutely no claim to calling themselves an autocephalous Church. Fully aware of the illegitimacy of their position, in 1971 some prominent theologians of the OCA brokered a deal with the Moscow Patriarchate, one that even the other Patriarchates protested was an uncanonical move.[4]

The history of St. John's Cathedral in Mayfield, Pennsylvania, describes the 1946 severence of ties between the Metropolia and the ROCOR as a split within one body:

In 1946, at the Cleveland Sobor, the Synod of Bishops of the Russian Orthodox Church Outside Russia indicated that the church headquarters would be moved to New York. A split then occurred in the American Metropolia, and the decision was by approximately half of the bishops to disassociate with the Russian Synod Abroad.[5]

Fr. Andrew Philips, an English ROCOR historian describes the split in this way:

After 1917, they first joined together with the Russian Orthodox Church Outside Russia. However, eventually after much hesitation, a small number of Russian bishops in North America cut themselves off from the Russian Orthodox Church Outside Russia and formed an independent but uncanonical group, called the Metropolia. In 1970 this group was given autocephaly (independence) by the still enslaved Church in Russia.[6]

Additionally, that the Metropolia (led at the time by Metropolitan Platon (Rozhdestvensky) of New York) was part of the ROCOR was attested to by St. John Maximovitch:

The question of the nature of the relationship between the ROCOR and the Metropolia during this period has significant bearing on the jurisdictional legitimacy of both the OCA and the ROCOR as they now exist. If they never had much more than a "loose association," then the OCA's argument for Orthodox primacy in America is strengthened, as it would never have been under any jurisdictional authority other than Moscow's or its own. The period from the 1920s until 1970 of tension between it and Moscow are simply a difficult period between an mission diocese and its mother church.

If, however, the Metropolia was indeed part of the ROCOR, then its claims to being the direct heir of Russia's primacy in America are thrown into question, and the legitimacy of Moscow's grant of autocephaly to the OCA in 1970 has significant problems, in that it would be favoring a rogue jurisdiction which had switched allegiances multiple times. 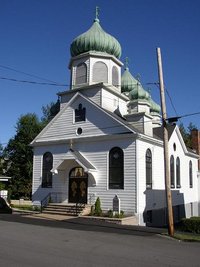 St. Basil the Great Russian Orthodox Church (Simpson, PA), which has been in the MP, the OCA, and the ROCOR.

In 1982, Bishop Herman (Swaiko) of Philadelphia, the OCA's bishop for Eastern Pennsylvania, decreed that all of his parishes would begin using the Revised Julian Calendar. Some were already using it, but others had been using the Julian Calendar steadily up to that point.

As a result of this decree, internal schisms occurred in parishes throughout the diocese, particularly in the OCA heartland of the Wyoming Valley (Scranton and Wilkes-Barre area). St. John's Cathedral in Mayfield broke completely from the OCA (having come to it in 1951 from ROCOR), and two parishes split in two, creating two new parishes in Old Forge (St. Stephen's, splitting from St. Michael's and building a new church) and Simpson (St. Basil's, keeping its building, while those remaining with the OCA found new worship space). In numerous other parishes, migrations occurred of faithful, segregating themselves according to calendar preference—those preferring the Julian Calendar went with ROCOR, while those choosing the revised calendar stayed with the OCA.

This division further intensified hostile feelings between the OCA and the ROCOR, which was then entering into a phase of providing a haven for disaffected parishes and clergy seeking refuge from "modernist" jurisdictions. Much of that sort of behavior has been ascribed by ROCOR historian Fr. Alexey Young as due to the influence of Holy Transfiguration Monastery being incorporated into the Russian Church Abroad.

Since the election of Metropolian Laurus (Skurla) of New York as First Hierarch of the ROCOR and that body's subsequent ongoing rapprochement with Moscow, signs have appeared of better relations between the OCA and ROCOR. Seminarians studying at OCA seminaries have attended retreats at the ROCOR's Holy Trinity Orthodox Seminary (Jordanville, New York), and ROCOR seminarians have also participated in OISM events at OCA seminaries. Warmly worded letters from the OCA hierarchy have also been sent to the ROCOR hierarchy.[8] Further, pilgrims from the ROCOR have visited the OCA metochion in Moscow [9] and Metropolitan Laurus has received representatives of the OCA for informal discussions.[10]

Perhaps with these signs of greater cooperation, these two daughters of Russian Orthodoxy in the West will come to terms with their mutual history and fully reconcile.