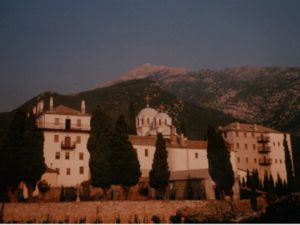 Belonging to the abbey of the Great Lavra, the Romanian Skete of Saint John the Baptist is perched upon a low rocky hill located between Kavsokalyvia Skete and the Lavra itself. Prior to 1857 it existed as a Greek cell but after being sold to Romanian monks Nekatarios and Niphon it became recognized as a skete. Its architectural design is typically Athonite with buildings rectangularly shaped around a central courtyard.

The library consists of 5000 printed books and 130 manuscripts, primarily in Romanian language.

There are 25 monks in residence.