Prayer of the Three Holy Children 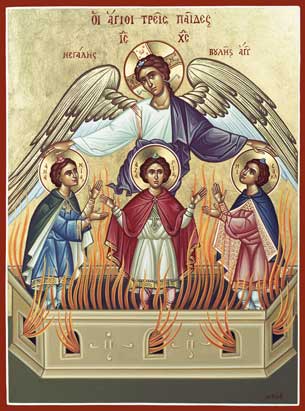 The Prayer of the Three Holy Children is a component of the biblical Book of Daniel. It is a segment of a larger component called The Prayer of Azariah and the Prayer of the Three Holy Children which. although part of the Septuagint text, is considered by Protestants as part of the Apocrypha rather than a fully canonical part of Scripture, and so appears in most English-language bibles as a seperate section. If included within the larger text of Daniel, it would appear in the third chapter of between verses 23 and 24.

In Orthodox Christian worship, the prayer is the basis of the seventh and eighth biblical canticles sung at Orthros. Although the text of the canticles are generally not read in contemporary practice, the hymns sung as part of the canon reference the theme of the Three Holy Children. At Vespers of Holy Saturday, the text of the prayer is heard as part of one of the fifteen Old Testament readings prescribed for that day. In Byzantine practice, the closing refrains to each verse "bless ye the Lord: praise and exalt him above all for ever" are chanted elaborately.

The song constitutes a hymn of thanksgiving to God for deliverence from the fiery furnace into which the three young men, Ananias, Azarias and Misael (also known as Shadrach, Meshach and Abednego) had been cast by the Persian king Nebuchadnezzar. They were cast into the furnace for refusing to worship a golden idol that Nebuchadnezzar had created. However, an Angel of the Lord entered the furnace and protected the three young men. In liturgical practice, the event is seen to presage the Resurrection of Christ, thus its inclusion in the canon.

The Abingdon Bible Handbook (ISBN 0687001692) suggests that the Prayer was based on an earlier composition and was added to the existing text of Daniel sometime in the second or first century B.C.

Usage by Other Christians

The Roman Catholic Church considers this text to be part of the deuterocanonical collection which was defined at the Council of Trent in 1546 as "sacred" and "canonical." The Book of Common Prayer of the Church of England includes the text as the canticle Benedicite omnia Opera.