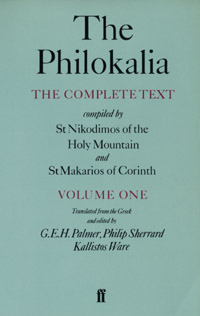 This listing of texts is based on the English translation, started by Bishop Kallistos Ware, G.E.H. Palmer and Philip Sherrard and published by Faber and Faber Ltd. The fifth volume has yet to be published. While there is no definite date set, it is predicted by the publisher to be made available sometime late in 2005. This translation uses the third edition published by the Astir Publishing Company.