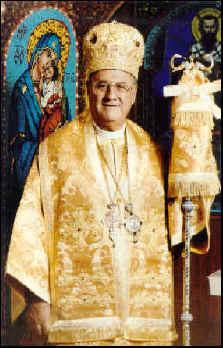 His Eminence Philip (Saliba) of New York, Metropolitan of New York and All North America (born June 10, 1931), is the current primate of the Antiochian Orthodox Christian Archdiocese of North America (1966 to present).

Philip was born Abdullah Saliba in the small village of Abou Mizan in Lebanon. In 1945, at the age of 14, he went to seminary at the Balamand Orthodox Theological Seminary in Tripoli, Lebanon, where he met his nearly lifelong friend, known today as His Grace, Bishop Antoun (Khoury) of Miami. He finished his schooling there in 1947, going to to further his studies at the Orthodox Secondary School in Homs, Syria (1947-1949).

In 1966, while still a priest, he was elected to serve as primate of the Church of Antioch's North American archdiocese. In June of that year, he was elevated to the rank of archimandrite by Metropolitan Elias (Kurban) of Tripoli. On August 14, 1966, he was consecrated to the sacred episcopacy and made an archbishop at St. Elias Monastery in Lebanon, performed by Patriarch Theodosius VI of Antioch. His enthronement as Metropolitan of New York was held in New York on October 13 of that year.

For nearly 40 years, Metropolitan Philip has led the Antiochian Orthodox Christian Archdiocese of North America, more than tripling the size of the archdiocese from about 65 parishes to around 250 parishes and missions today.