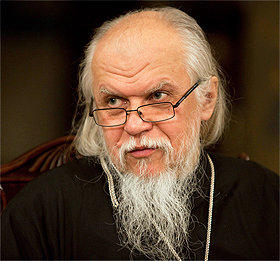 Panteleimon (Shatov) is the Bishop of Smolensk and Vyazma of the Church of Russia and chairman of the Synodal Department for Church Charity and Social Ministry, Russian Orthodox Church.

Arkady Viktorovich Shatov (Аркадий Викторович Шатов) was born on September 18, 1950 in Moscow, Russia. Arkady had married but is a widower and has four married daughters and 14 grandchildren.

In 1977, he entered the Moscow Theological Seminary, and was placed immediately in the second year.

Transferred to the correspondence department of the Moscow Theological Seminary, he was sent first to the parish service in Moscow and then to the Moscow oblast to the temple in village Nikolo-Arkhangelskoye.

On April 15, 1979, the feast of the Lord's Entrance into Jerusalem, Metropolitan of Krutitsy and Kolomna Juvenal ordained him a priest and appointed him rector of Trinity Church in village of Golochelovo, Moscow oblast.

In November 1990, he was appointed rector of the Church of St. Prince Dimitry at the First City Clinical Hospital (Pervaya Gradskaya bolnitsa), as part of which was founded the St. Dimitry Sisterhood.

In 2002, Fr. Arkady was appointed chairman of the church social activities of the Diocesan Council in Moscow. Since 2005, he has been the Deputy Chairman of the Board of Trustees of Hospital of St. Alexis, Metropolitan of Moscow.

On March 5, 2010,The Holy Synod of the Church of Russia appointed Fr. Arkady Chairman of the Synodal Department for Church Charity and Social Service.

On May 31, 2010, the Holy Synod was elected him a vicar of the Moscow Eparchy with the title of Bishop of Orekhovo-Zuyevo. On July 17, in the quarters of the Patriarchal house church at Trinity-Sergius Monastery, Patriarch Kirill tonsured Fr. Arkady with the little schema and named Panteleimon in honor of St. Panteleimon the Great Martyr and Healer. On July 18, Fr. Panteleimon was elevated to the rank of Archimandrite. On August 21 Archimandrite Panteleimon was consecrated Bishop of Orekhovo-Zuyevo, vicar of the Moscow Eparchy.

On March 22, 2011, the Holy Synod appointed Bp. Panteleimon Bishop of Smolensk and Vyazma while retaining the position of Chairman of the Synodal Department for Church Charity and Social Service. During its session of 5-6 October 2011, the Holy Synod confirmed his appointment as abbot of the Avraamy Transfiguration Monastery in Smolensk.