Panagia Tricherousa is another Hodegetria-style icon known as the "Virgin with Three Hands." This icon is at the Serbian Monastery of Chiliandari, Mount Athos, Greece. This icon is commemorated by the Church on June 28 and July 12.

A great fighter against the iconoclasts, St. John Damascene was accused of being an enemy of the state in which he lived, and as punishment, the Caliph ordered that one of his hands be chopped off. Afterwards, St. John took the severed hand, prayed in front of the icon of the Theotokos and fell asleep. The Theotokos wrought the miracle of re-attaching the dead hand of her servant and bringing it back to life. When he awoke, he found that his hand was completely healed.

In honor of that healing, he made a silver votive offering in the shape of a hand and placed it on the icon in such a way that it appears that the Virgin Mary has a third hand. Until the 12th century, the icon was kept at the lavra of St. Sabbas. It was given to St. Sabbas, Archbishop of Serbia, and founder of the monastery of Chilandri, during a visit to the Holy Land. He took it with him to Serbia, and it was brought to the Holy Mountain in a miraculous manner.[1] 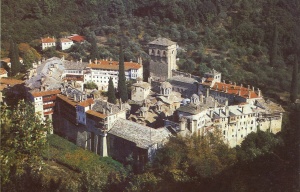