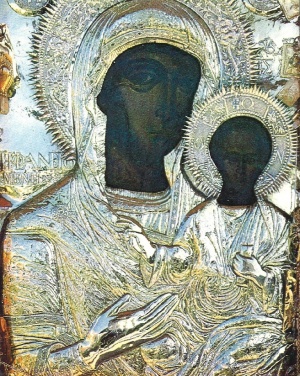 Panagia Phaneromene, (Phaneromene: Greek: Revealed), is an icon of the Theotokos associated with the discovery/revealing of her icon at a number of churches and monasteries of Greece.

According to the Greek Great Synaxarion, St. Laurence (Lawrence) is commemorated by the church on March 7 as founder of the monastery of Phaneromene on the island of Salamis. He lived in Megara as a married man with two sons and was righteous and devout. According to the synaxarion, the Holy Mother of God appeared to him in a dream and commanded him to go to the island of Salamis and to restore to her an existing church at a certain location. He went and discovered the ruins of an old building and built a new church. The story continues that he was then tonsured a monk and he died on March 7, 1770 AD.

At this location, the religious icon of the Virgin Mary "Faneromeni" was found in the old Iraklitsa of Eastern Thrace by three nuns: Agni, Tatiana, and Paisia.[1]

This monastery belongs to the Diocese of Corinth, Sikyon, Zemeno, Tarsos and Polyfengos, Korinthos, Greece.[2] It is situated 4km west of Hiliomodi and is dedicated to the Panagia Faneromeni.

The old monastery was built in 1250 and was located at the very peak of the hill and would take over an hour to travel to. The monastery belonged to late-Byzantine construction and a huge property. The spiritual character of the monastery is studied through its well preserved Catholikos. The monastery took the name according to folklore, after the discovery of the Virgin Mary's icon of the same name.

The church of the new monastery was constructed in 1700. It is an imposing stone-built structure, elevated from the ground. It takes up the entire western side of the internal garden and has a 1897 dome-shaped crossed ceramic roof, which from the inside is a complex four-pillared structure. At first, it was a monastery for men but since 1849 it was converted into a convent.

On a little square on the corner of Nickiphorou Theotoki street stands this little church dedicated to the Phaneromeni. It was founded in 1689 and was, for a long time, the parish church for the Community of Greeks from Epiros. This church is also commonly called the 'Virgin of Strangers' (Panagia ton Xenon).[3]

This is a very important Byzantine monument 20km from Loutraki. It is at an elevation of 1,150m in the Geraneia mountains and surrounded by pine-trees and firs. There used to be a wealthy coenobitic monastery on this site, dating as far back as 1821. It is the catholikon of this archaeological site that was dedicated to the Phaneromene. The church is most notable for its excellent wall paintings, in the Byzantine style and on Biblical themese. On the right hand door of the sanctuary is a plaque recording that the wall paintings were executed in 1466. This church is now better known as Our Lady 'tou Prathi'.[4]

The monastery of Phaneromeni lies just behind the exit from the town of Aigina, to the south-east, on the road to Agia Marina bay called Phaneromeni. On the site, the church is a three-aisled basilica, of which the apses are still clearly recognisable. The constructions began sometime in the 13th century, which remained unfinished. The Bishop of Aigina, in the 19th century, lived near this monastery and there remain two underground chapels that can be reached from his garden to a small cave. The icon of Phaneromene is supposed to have been found during the construction of the church in the 13th century in this cave. Today, this estate, its surrounds and the monastery of Phaneromeni belong to the monastery of Chrysoleontissa, which is a little further inland.

Situated close to the bay of Ambram beach, this is a 17th century monastery with very rare icons.

This monastery is an antique religious construction which is also built within a cave. It is very appealing to tourist due to its structural characteristics and its unique location. This monastery was founded in the late 19th century and is situated at an elevation of 800m - it is very hospitable, warm and friendly and celebrates its feast day on November 9

This monastery is built into a steep hillside and there are six monks and an abbot. The original community was situated around the large cave in which, you will be advised, the icon of Panagia Phaneromeni was discovered.

The catholiko was built in 1634. It was a privately owned monastery up until 1760. In 1886 it was burnt down by a fire and then rebuilt 3km south-west of its original location. [5]

Deliverance from nightmares and fears

My name is D. D. and I live in Corinth. In January of 1993, I had nightmares night and day that my child would die. I continually envisioned a funeral at my house and experienced various nightmarish dreams. During the day, I had terrible fears and expected any moment that my child would be brought to me dead. This had never happened to me before in my life. For two days I did not go to work. I prayed continually, but this state of mind continued. On the third day, I took the icon of the Panagia Phaneromene, and asked her where I should go and which Saint I should beseech so that I would become well and nothing bad would happen to my child. At noon, without understanding exactly why, I decided that we should go to the monastery of Sts. Cyprian and Justina. Inside the Church, I saw the Relics of St. Joseph of Cappadocia and, knowing that miracles take place wherever there are Relics of Saints, I ran, venerated them, sat next to the Saint, and prayed that he make me well and that my child would suffer no evil. I also asked him to grant me joy as proof that my prayer had been heard. When we left the monastery, my fears had vanished and, until the time we reached home, we felt inexpressible joy within us. I thank God, the Panagia, and St. Joseph, who help us in every difficult moment of our lives.[6]